SCULPTURE BEFORE WORLD WAR I

Sculpture, the most conservative of the arts throughout most of the nineteenth century, found it difficult to cast off the burden of tradition. It has remained far less adventurous on the whole than painting, which often influenced it. Indeed, the American sculptor David Smith

claimed that modern sculpture was created by the painters, and to a remarkable degree he was right. Sculpture has successfully challenged the leadership of painting in our time only by following a separate path.


Some of the most important experiments in sculpture were conducted by Matisse in the years 1907-14, when he was inspired by ethnographic sculpture, although there had been a growing interest in "primitive" art on the part of painters like Gauguin even before the first major public collections began to be formed in 1890. At first glance. Reclining Nude I (fig. 1124) seems utterly removed from Matisse's paintings. Yet sculpture was a natural complement to his pictures, which often share its "savage" element. It allowed him to investigate problems of form that in turn provided important lessons for his pictures. Despite the bulging distortions in the anatomy, which create an astonishing muscular tension, the artist was concerned above all with "arabesque": the rhythmic contours that define the nude. We will recognize the statuette's kinship with the recumbent figures in The Joy of Life (fig. 1036), which were also conceived in outline. But now these rhythms are explored plastically and manipulated for expressive effect. Remarkably, Matisse accomplishes this without diminishing the fundamentally classical character of the nude. 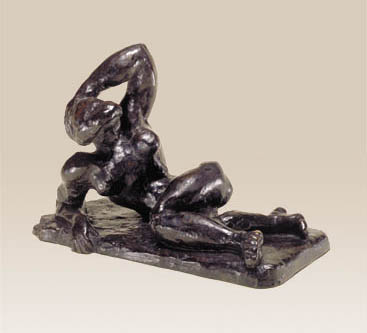 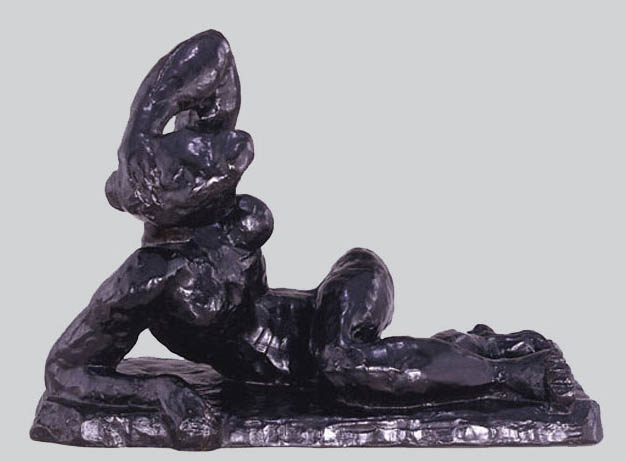 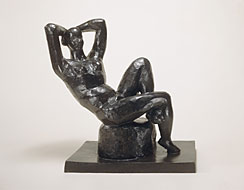 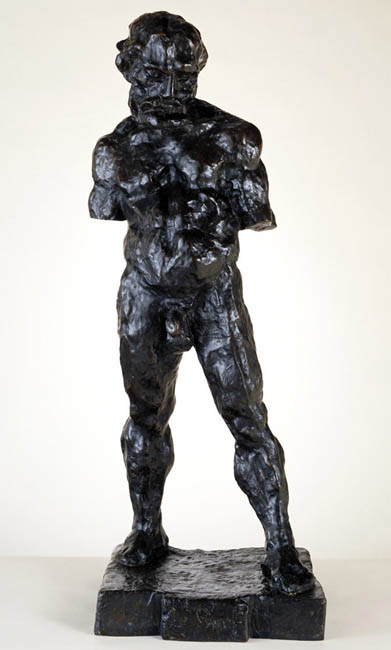 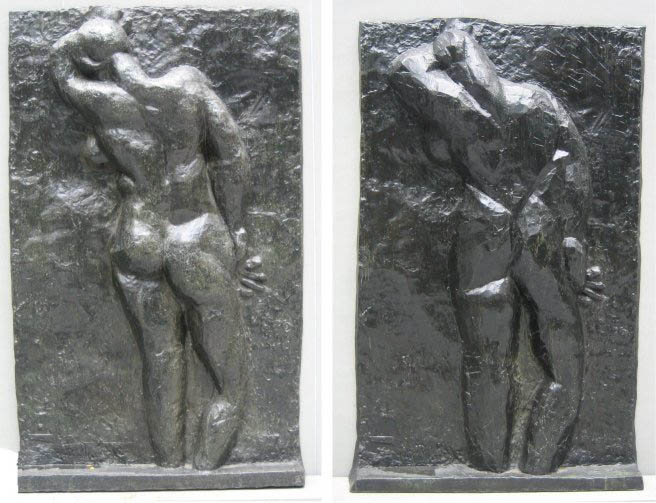 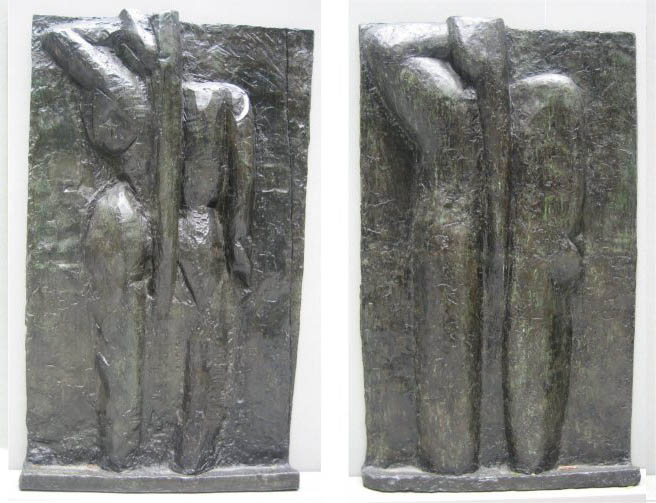 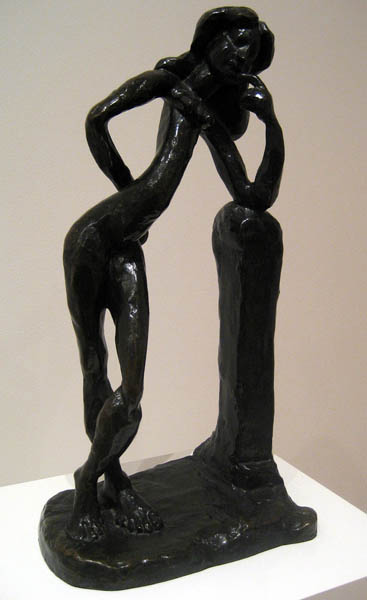 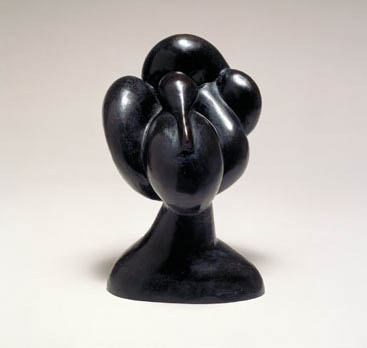 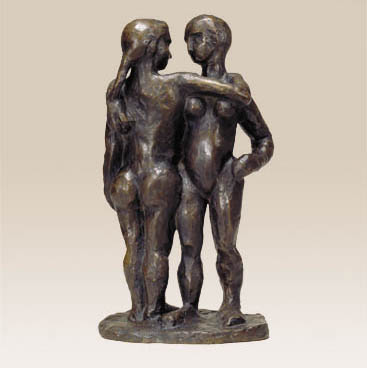 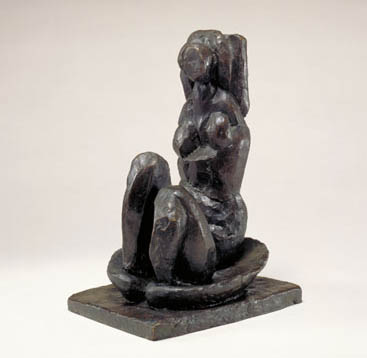 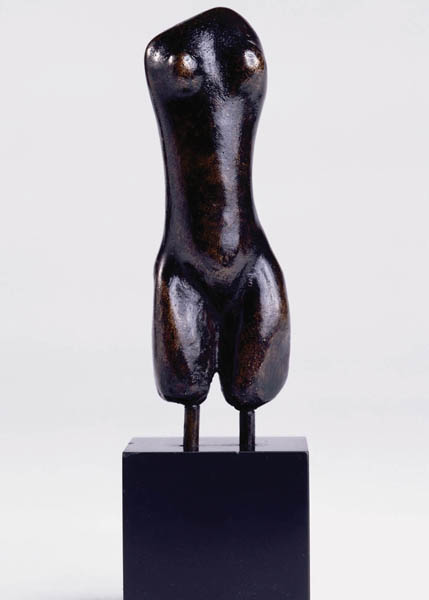 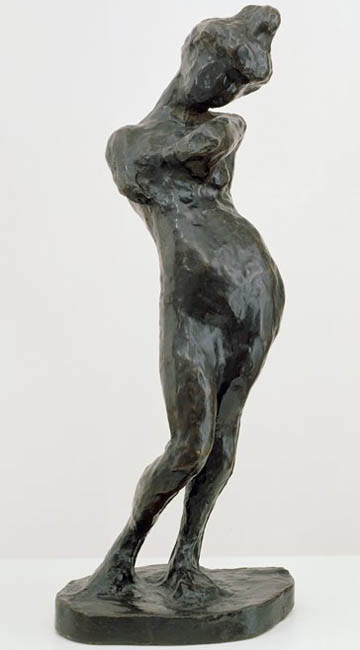 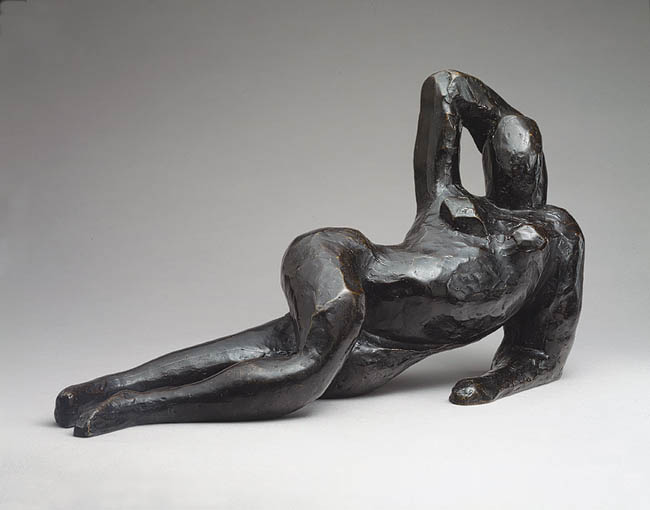 Sculpture remained only a sideline for Matisse. Perhaps for that reason. Expressionism was a much less important current in sculpture than in painting. This may seem surprising, since the rediscovery of ethnographic sculpture by the Fauves might have been expected to evoke a strong response among sculptors. Yet the only one who shared in this interest was Constantin Brancusi (1876-1957), a Romanian who went to Paris in 1904. However, he was more concerned with the formal simplicity and coherence of primitive carvings than in their savage expressiveness. This is evident in The Kiss (fig. 1125). executed in 1909 and now placed over a tomb in a Parisian cemetery.

The compactness and self-sufficiency of this group arc a radical step beyond Maillol's Seated Woman (see fig. 1009), to which it is related much as the Fauves are to Post-Impressionism. Brancusi has a "genius of omission" not unlike Matisse's. And his attitude toward art expresses the same optimistic faith so characteristic of early modernism: "Don't look for mysteries," he said. "I give you pure joy." To him, a monument is a permanent marker, like the steles of the ancients: an upright slab, symmetrical and immobile, and he disturbs this basic shape as little as possible. The embracing lovers are differentiated just enough to be separately identifiable, and seem more primeval than primitive. They are a timeless symbol of generation, innocent and anonymous—the exact opposite of Rodin's The Kiss (see fig. 971), where the contrast of flesh and stone mirrors the dualism or guilt and desire. Herein lies the genius of Brancusi: he posed the first successful alternative to Rodin, whose vast authority overwhelmed the creativity of many younger sculptors. In the process, Brancusi gave modern sculpture its independence.

Brancusi's work took another daring step about 1910, when he began to produce non-representational pieces in marble or metal. (He reserved his "primeval" style for wood and stone.) The former fall into two groups: variations on the egg shape and soaring, vertical "bird" motifs. In concentrating on two basic forms of such uncompromising simplicity, Brancusi strove for essences, not for Rodin's illusion of growth. He was fascinated by the antithesis of life as potential and as kinetic energy: the sell-contained perfection of the egg, which hides the mystery of all creation, and the pure dynamics of the creature released from this shell. The Newborn (fig. 1126) is a marvelously concise and witty, yet surprisingly sympathetic, portrayal of an infant's first cry upon entering the world.

Bird in Space (fig. 1127), made more than a decade later, is the culmination of Brancusi's art. It began as the figure of a mythical bird that talks, which he gradually simplified until it is no longer the abstract image of a bird. Rather, it is flight itself, made visible and concrete: "All my life I have sought the essence of flight," Brancusi stated, and he repeated the motif in variants of ever greater refinement. Its disembodied quality is emphasized by the high polish that gives the surface the reflectivity of a mirror, thus establishing a new continuity between the molded space within and the free space without.

In the second decade of the century a number of artists tackled the problem of body-space relationships with the formal tools of Cubism—no simple task, since Cubism was a painter's approach more suited to shallow relief and noteasily adapted to objects in the round. Most of the Cubist painters essayed at least a few sculptures, but the results were generally timid. Picasso's tentative efforts at sculpture attest to the difficulties he faced, yet they were of fundamental importance nonetheless. His attempts to translate the Analytic Cubism seen in Portrait of Ambroise Vollard (fig.

1049) into three-dimensional form succeeded only partially in breaking up the solid surface. Precisely because its facets are ambiguous in density and location, painting afforded an infinitely richer experience both visually and expressively.

(1876-1916), an elder brother of Marcel Duchamp. in The Great Horse (fig. 1128). He began with abstract studies of the animal, but his final version is an image of "horsepower," wherein the body has become a coiled spring and the legs resemble piston rods. Because of this very remoteness from their anatomical model, these quasi-mechanical shapes have a dynamism that is altogether persuasive. 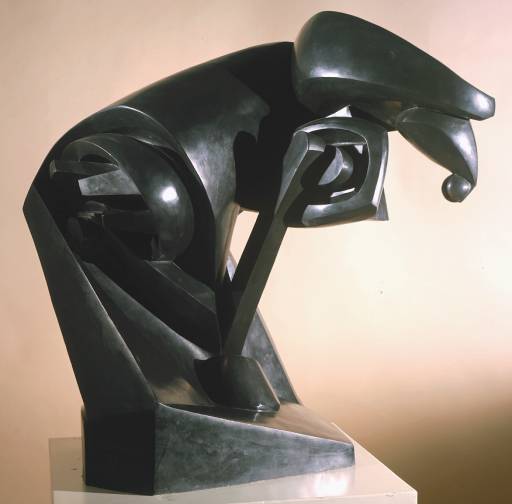 1912 the Futurists suddenly became absorbed with making sculpture, which they sought to redefine as radically as painting. They used "force-lines" to create an "arabesque of directional curves" as part of a "systematization of the interpenetration of planes." Hence, as Umberto Boccioni declared, "We break open the figure and enclose it in environment." His running figure entitled Unique Forms of Continuity in Space (fig. 1129) is as breathtaking in its complexity as Brancusi's Bird in Space is simple. Boccioni has attempted to represent not the human form itself, but the imprint of its motion upon the medium in which it moves. The figure itself remains concealed behind its "garment" of aerial turbulence. The picturesque statue recalls the famous Futurist statement that "the roaring automobile is more beautiful than the Winged Victory," although it obviously owes more to the Winged Victory (the Nike of Samothrace, fig. 216) than to the design of motor cars. (Fins and streamlining, in 1913, were still to come.) Boccioni's source of inspiration may have been even closer at hand: he could have seen the work of Niccolo dell'Arca (compare fig. 620). 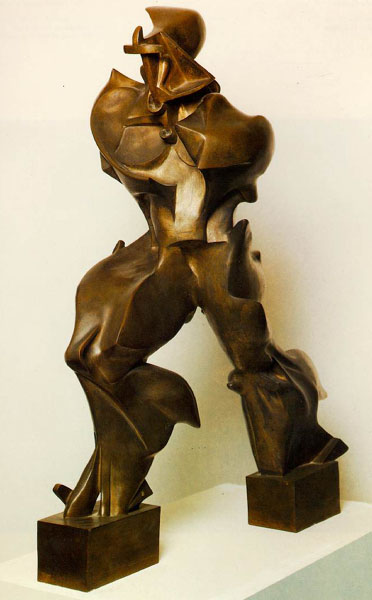 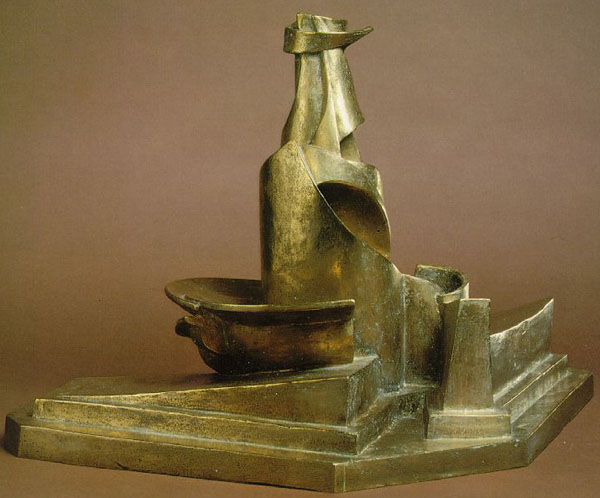 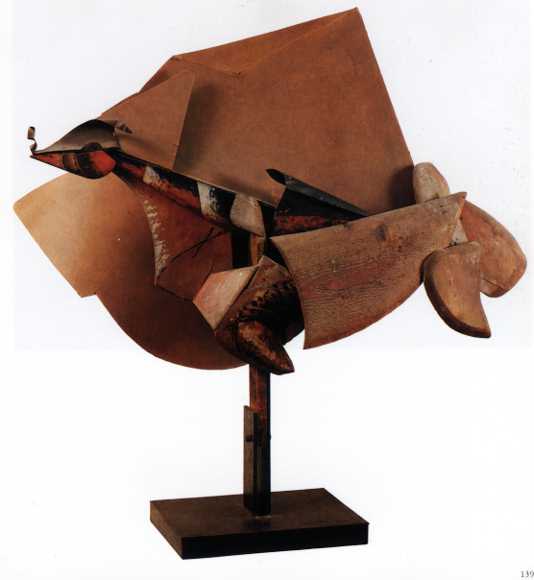 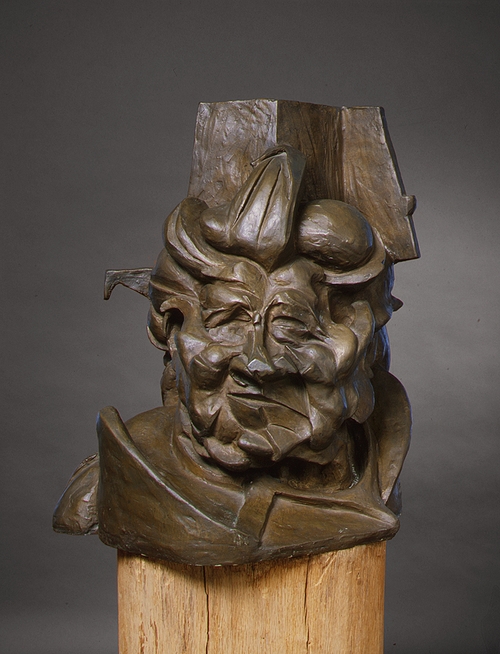 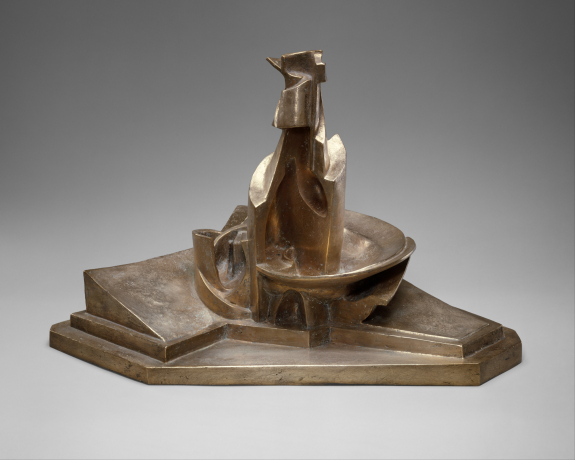 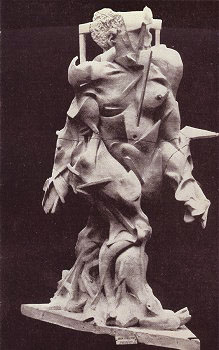 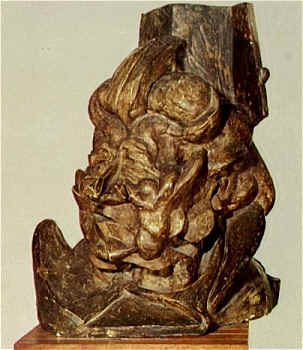 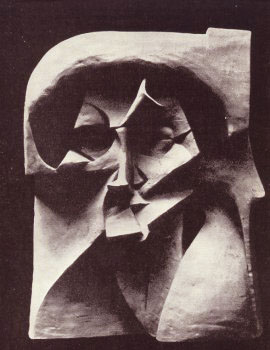 Umberto Boccioni.
Abstract Voids and Solids of a Head 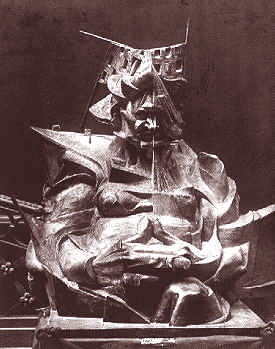