Richardson's Marshall Field building thus stands midway between the old and the new. It embodies, with utmost severity and logic, a concept of monumentality derived from the past, but its opened-up walls, divided into vertical "bays,

" look forward to the work of Louis Sullivan (1856-1924). The Wainwright Building in St. Louis (fig. 1024), his first skyscraper, is only five years after the Marshall Field Store. It, too, is monumental, but in a very untraditional way. The organization of the exterior reflects and expresses the internal steel skeleton, in the slender, continuous brick piers that rise between the windows from the base to the attic. Their collective effect is that of a vertical grating encased by the corner piers and by the emphatic horizontals of attic and mezzanine. This is, of course, only one of the many possible "skins" that could be stretched over the structural framework. What counts is that we immediately feel this wall is derived from the skeleton underneath, that it is not self-sustaining. "Skin" is perhaps too weak a term to describe this brick sheathing. To Sullivan, who often thought of buildings as analogous to the human body, it was more like the "flesh" and "muscle" that are attached to the "bone" yet are capable of an infinite variety of expressive effects. When he insisted that "form ever follows function," he meant a flexible relationship between the two, not rigid dependence.

The range of Sullivan's invention becomes evident if we compare the Wainwright Building with his last building, the department store of Carson Pirie Scott

& Company in Chicago, begun nine years later (fig. 1025). The sheathing of white terracotta here follows the grid of the steel frame far more closely, and the overall effect, enhanced by the simple molding around the windows (fig. 1026), is one of lightness and crispness rather than of harnessed energy. The contrast between the horizontal continuity of the flanks and the vertical accent at the corner has been subtly calculated to provide a clear terminus to the facade.

Paradoxically, Sullivan's buildings are based on a lofty idealism and adorned with a type of ornamentation that remain firmly rooted in the nineteenth century, even as they point the way to the architecture of our own era. From the beginning his geometry carried a spiritual meaning, inspired partly by Emanuel Swedenborg, that centered on birth, flowering, decay, and regeneration. It was tied to a highly original style of decoration in accordance with Sullivan's theory that ornament must give expression to structure

—not by reflecting it literally but by interpreting the same concepts through organic abstraction. The soaring verticality of the Wainwright Building, for example, stands for growth, which is elaborated by the vegetative motifs of the moldings along the cornice and between the windows. Likewise the clean articulation of the windows on the upper stories of the Carson Pirie Scott building gives way on the ground floor and mezzanine to a lavish display of ironwork (designed largely by George G. Elmslie using Sullivan's system), enhancing the store-front's appeal to shoppers. 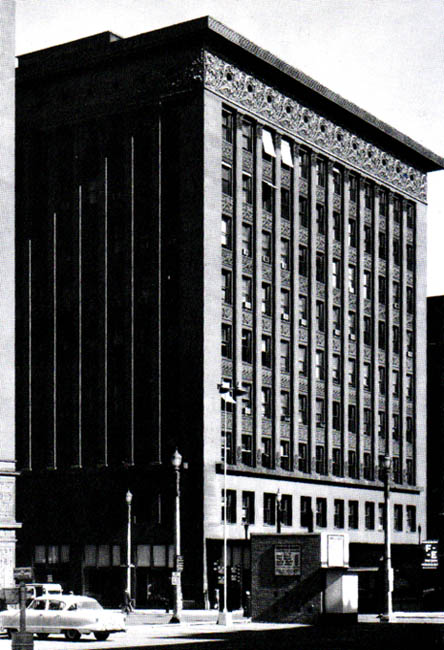 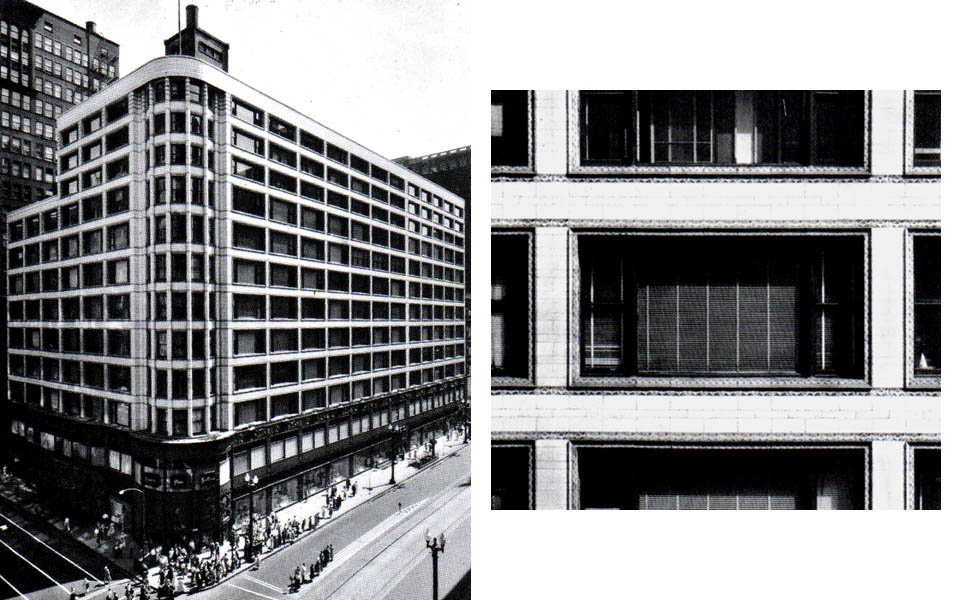 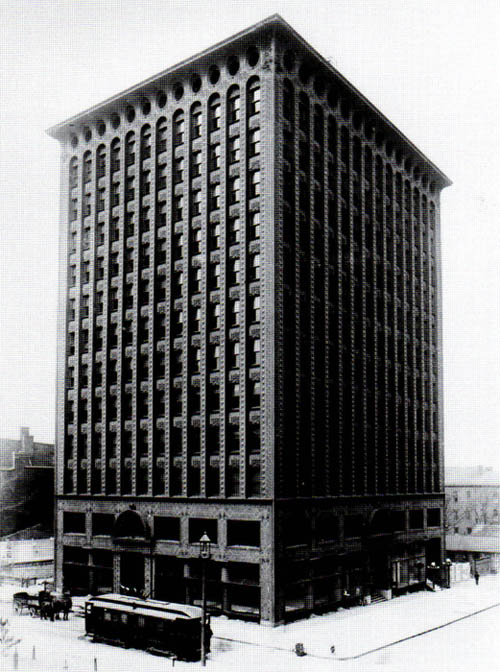 Sullivan's particular accomplishment lies in the fact that he did not adopt the basic steel skeleton, with its wide gaps between supports, into the facade design, but geve this a unique grid that suggests the image of a high-rise building wrh narrow vertical windows, each crowned at the top like the dot of an "i". 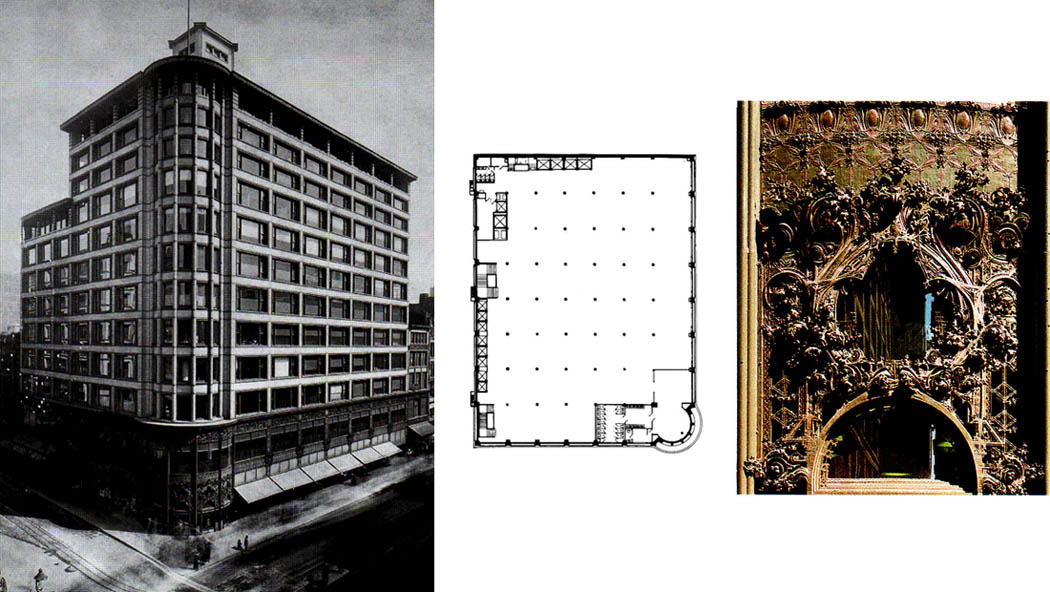 The ornamental cast iron surface-fillings over the entrance create a contrast to the sober quality of the facade.
Photo Peter Gossel 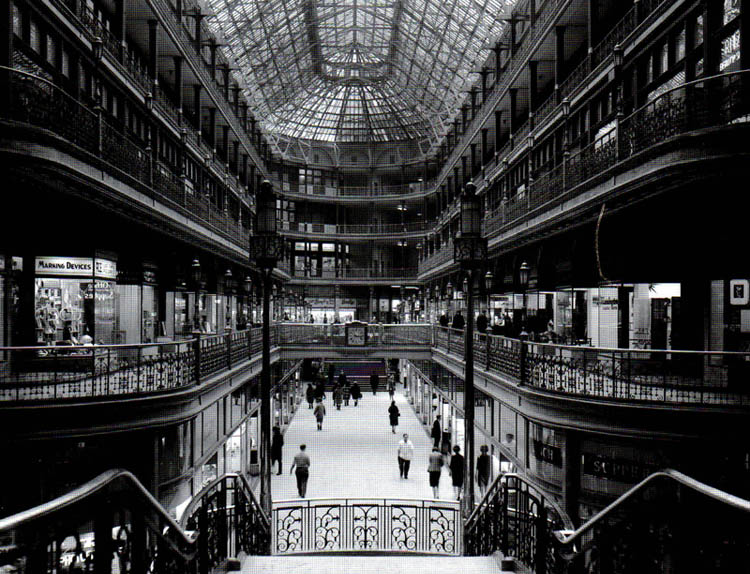 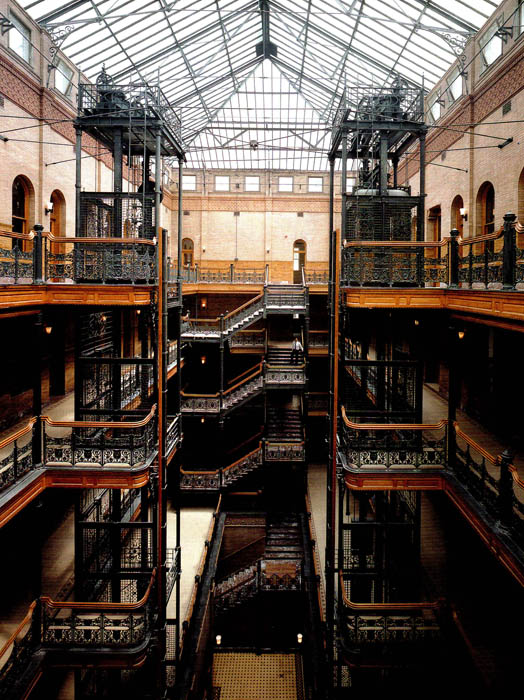 This brick and sandstone office building with its five floors seems conservative on the outside. Its inner courtyard, with glazed roof, exposed staircases and free-standing hydraulic elevators is, however, a triumph of iron architecture. Forms of access have here become autonomous elements of movement and communication.

The representative value of a house was nevertheless a function which he took seriously. Ever taller buildings now sprang up at great speed. Highly-specialized teams of workers erected their steel scaffolding at dizzying heights, with Chicago and New York alternately outdoing each other. Meanwhile the streets below grew darker and darker until, in 1898, architect Ernest Flagg suggested that only the base sections of buildings should be permitted to extend as far as the street, while any projecting towers should be restricted to one-quarter of the total site size. This idea was adopted in 1916 as part of New York's new construction regulations, and was not without impact on architectural design. The rigorous exploitation of maximum permitted building volumes led to unproportioned, tiered buildings which rose like wedding cakes from massive bases. Therefore the structural clarity of earlier high-rises was completely destroyed, and it would take a long time before comparable achievements were once again reached. 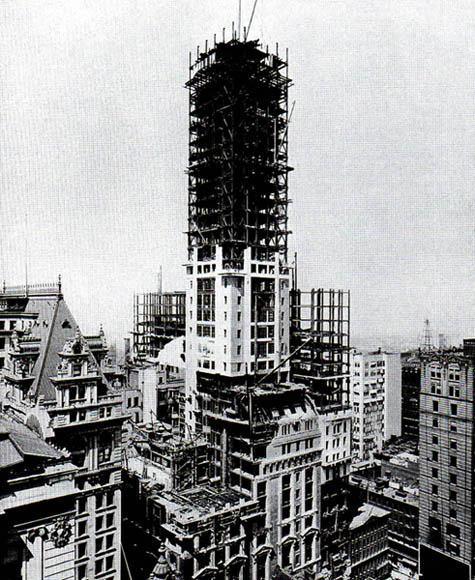 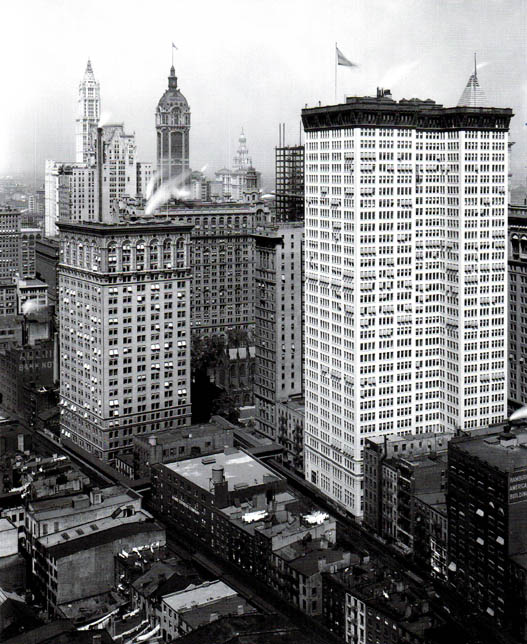 The Singer Building by Ernest Flagg end the Woolworth Building by Cass Gilbert (1911-1913) can be seen in the background, and in the foreground,
the Adams Building.