Most later sixteenth-century architecture can hardly be called Mannerist at all. Although he, too, drew inspiration from Sansovino, Andrea Palladio (1518-1580), next to Michelangelo the most important architect of the century, belongs to the tradition of the humanist and theoretician Leone Battista Alberti.

Although his career centered on Vicenza, his native town, his buildings and theoretical writings brought him international status. Palladio insisted that architecture must be governed by reason and by certain rules that were perfectly exemplified by the buildings of the ancients. He thus shared Alberti's basic outlook and his faith in the cosmic significance of numerical ratios

. But the two differed in how each related theory and practice. With Alberti, this relationship had been loose and flexible, whereas Palladio believed quite literally in practicing what he preached. His architectural treatise is consequently more practical than Alberti's, which helps to explain its huge success, while his buildings are linked more directly with his theories. It has even been said that Palladio designed only what was, in his view, sanctioned by ancient precedent. Indeed, the usual term for both Palladio's work and theoretical attitude is "classicistic," to denote a conscious striving for classic qualities, though the results are not necessarily classical in style.

702 and 703), one of Palladio's finest buildings, perfectly illustrates the meaning of his classicism. An aristocratic country residence near Vicenza, it consists of a square block surmounted by a dome and is faced on all four sides with identical porches in the shape of temple fronts. Alberti had defined the ideal church as such a completely symmetrical, centralized design, and it is evident that Palladio found in the same principles the ideal country house. How could he justify a context so purely secular for the solemn motif of the temple front? Like Alberti, he sought support in a selective interpretation of the historical evidence. He was convinced, on the basis of ancient literary sources, that Roman private houses had porticoes like these. But Palladio's use of the temple front here is not mere antiquarianism. He probably persuaded himself that it was legitimate because he regarded this feature as desirable for both beauty and utility. Beautifully correlated with the walls behind, the porches of the Villa Rotonda are an organic part of his design that lends the structure an air of serene dignity and festive grace. 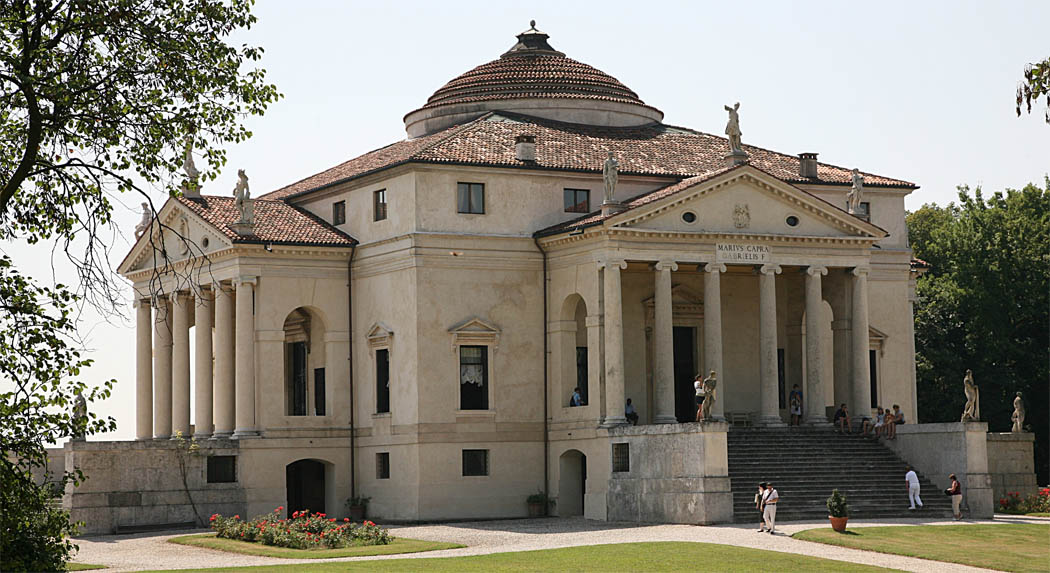 
The facade of S. Giorgio Maggiore in Venice (fig. 704), of about the same date as the Villa Rotonda, adds to the same effect a new sumptuousness and complexity. Palladio's problem here was how to create a classically integrated facade for a basilican church. He surely knew Alberti's solution at S. Andrea in Mantua (see fig. 608): a temple front enclosing a triumphal arch. But this design, although impressively logical and compact, did not fit the cross section of a basilica and really circumvented the problem. Palladio, again following what he believed to be ancient precedent, found a different answer. He superimposed a tall, narrow temple front on another low, wide one to reflect the different heights of nave and aisles. Theoretically, it was a perfect solution. In practice, however, he found that he could not keep the two systems as separate as his classicistic conscience demanded and still integrate them into a harmonious whole. This conflict, which makes ambiguous those parts of the design that have a dual allegiance, might be interpreted as a Mannerist quality. The plan (fig. 705), too, suggests a duality. The main body of the church is strongly centralized—the transept is as long as the nave—but the longitudinal axis reasserts itself in the separate compartments for the main altar and the chapel beyond. 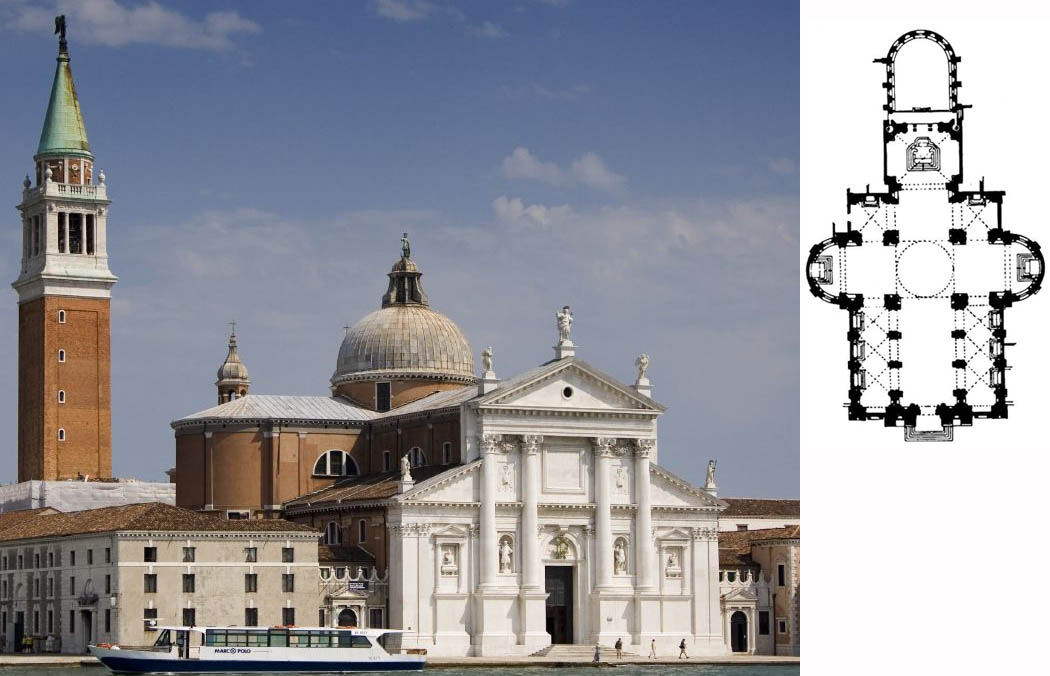 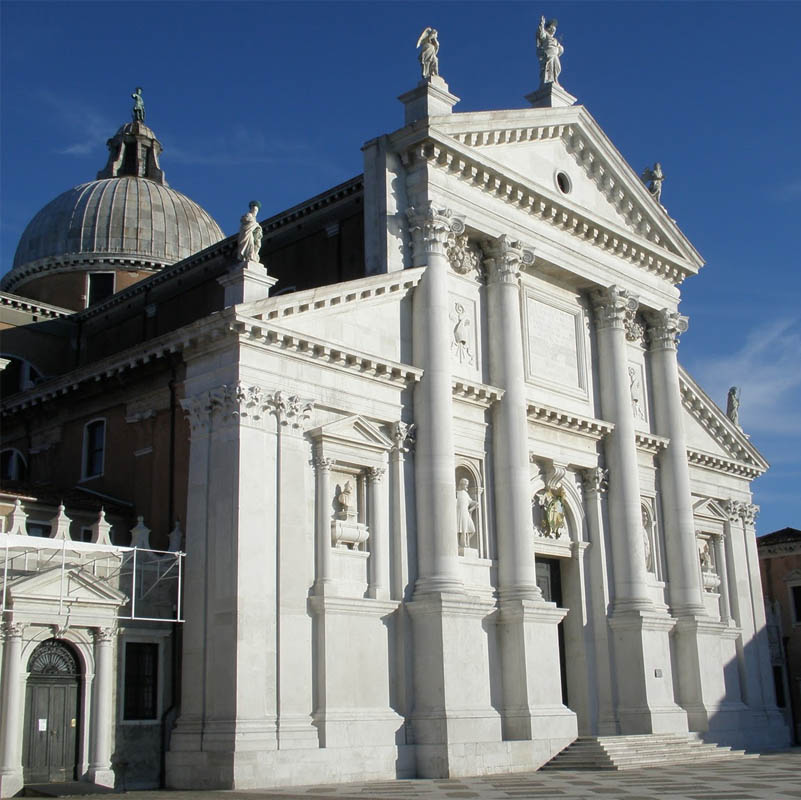 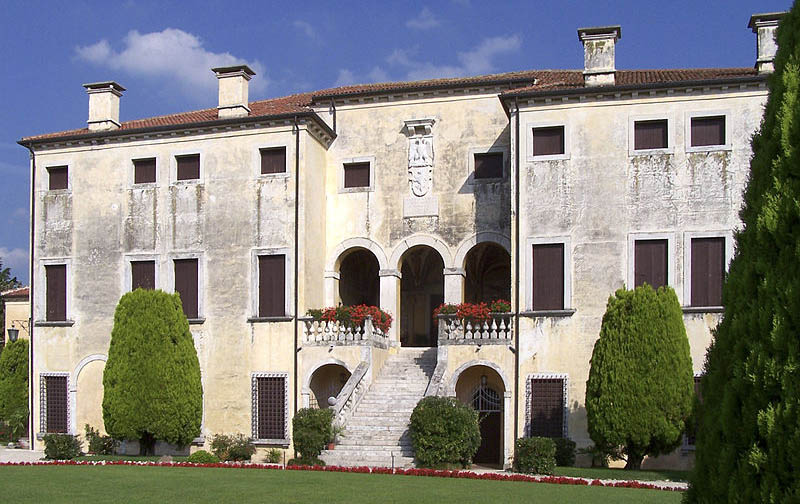 Palladios first commission: the Villa Godi in the hills of the Veneto region of northern Italy. 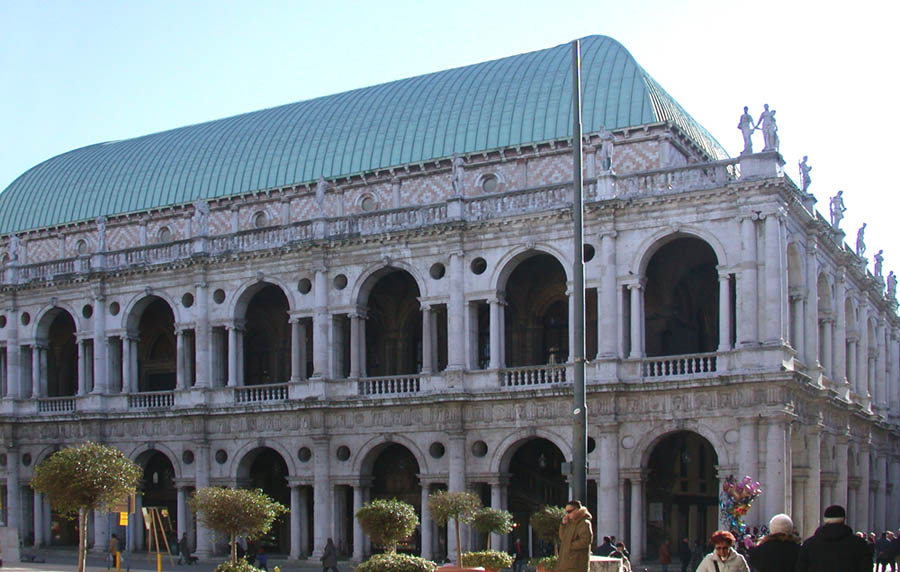 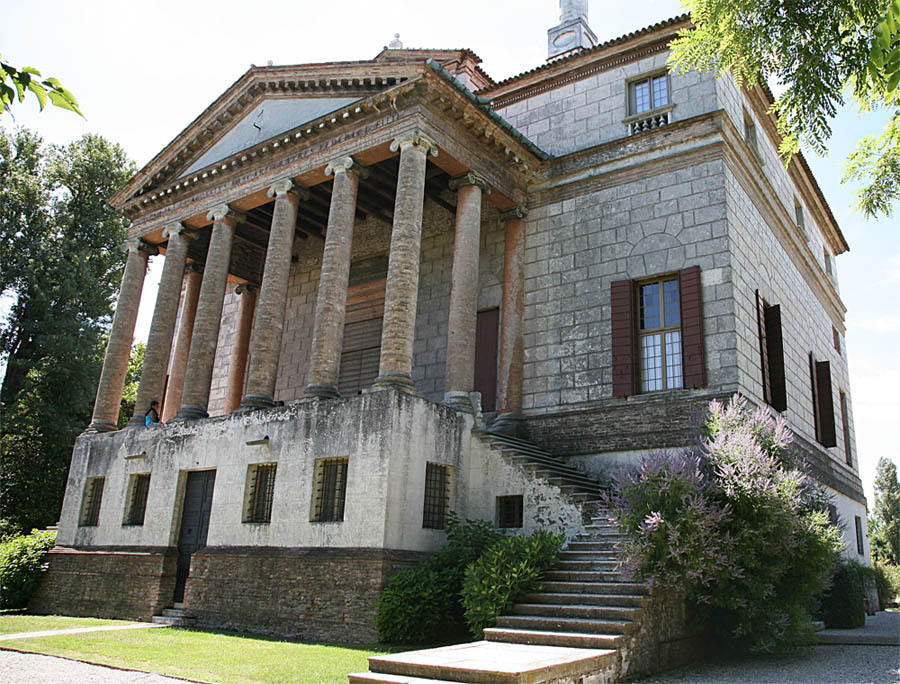 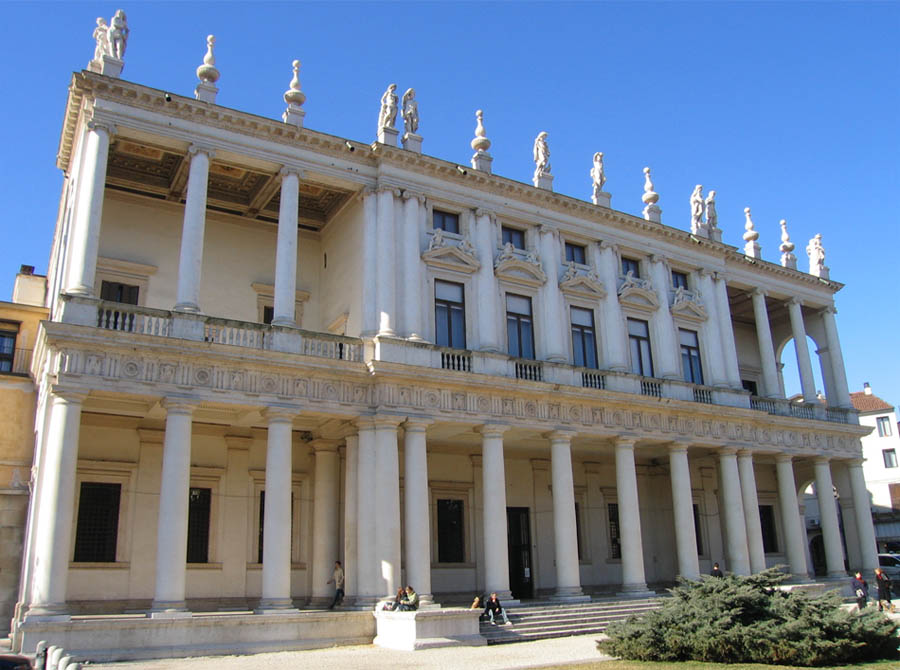 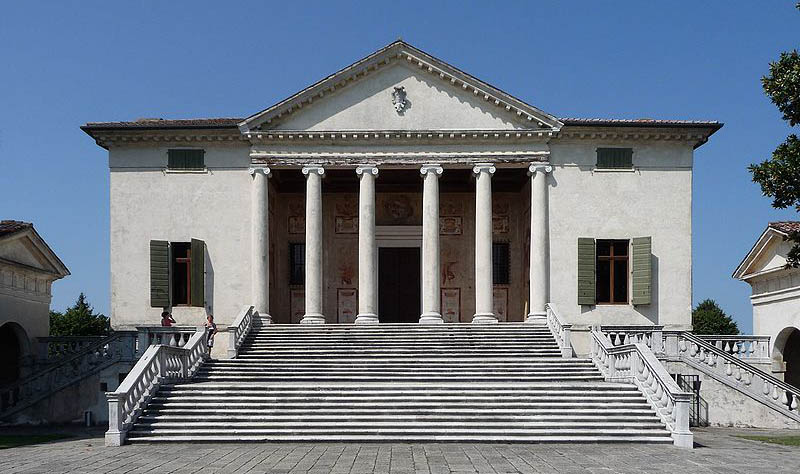 Villa Badoer in Fratta Polesine, province of Rovigo, Italy, designed by Andrea Palladio in 1554 and built 1556-1563. 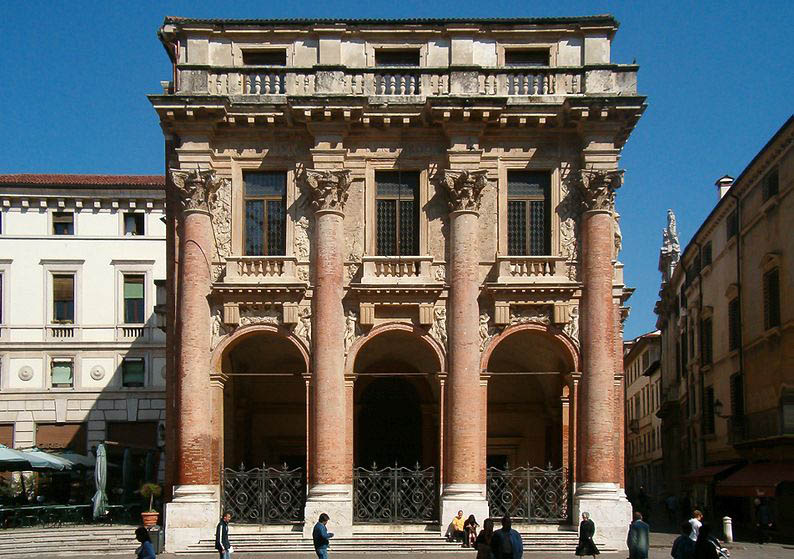 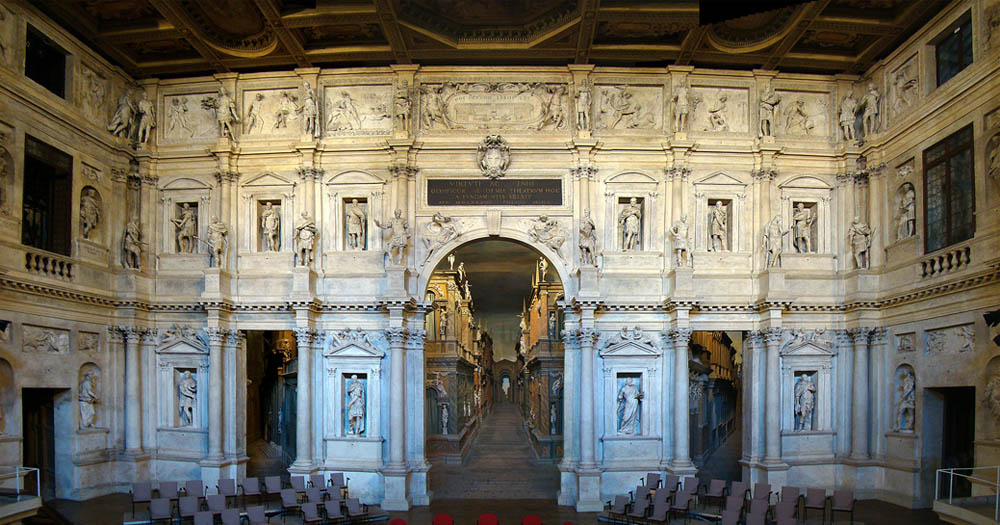 Andrea Palladio. Scaenae frons of the Teatro Olimpico. The large arch in the center is known as the porta regia or "royal arch".