Although Pollaiuolo did two monumental bronze tombs for St. Peter's in Rome during the late years of his career, he never had an opportunity to execute a large-scale free-standing statue. For such works we must turn to his slightly younger contemporary Andrea del Verrocchio (1435-1488), the greatest sculptor of his day and the only one to share some of Donatello s range and ambition. A modeler as well as a carver—we have works of his in marble, terracotta, silver, and bronze—he combined elements from Antonio Rossellino and Antonio del Pollaiuolo into a unique synthesis. He was also a respected painter and the teacher of Leonardo da Vinci, which is unfortunate, as he has been overshadowed ever since.

(fig. 621) owes its popularity to its enduring charm. It was designed as the center of a fountain for one of the Medici villas near Florence: the dolphin is spouting a jet of water, as if responding to the hug it has to endure. The term "putto" (plural, "putti") designates one of the nude, often winged male children who accompany more weighty subjects in ancient art. They personify spirits (such as the spirit of love, in which case we call them cupids), usually in a light-hearted way. They were reintroduced during the Early Renaissance, both in their original identity and as child angels. The dolphin associates Verrocchio's putto with the classical kind. (Note the small putto and dolphin in fig. 268) Artistically, however, he is closer to Pollaiuolo's Hercules and Antaeus than to ancient art. despite his larger size and greater sense of volume. Again the forms fly out in every direction from a central axis, but here the movement is graceful and continuous rather than jagged and broken. The stretched-out leg, the dolphin, and the arms and wings fit into an upward spiral, making the figure seem to revolve before our eyes. 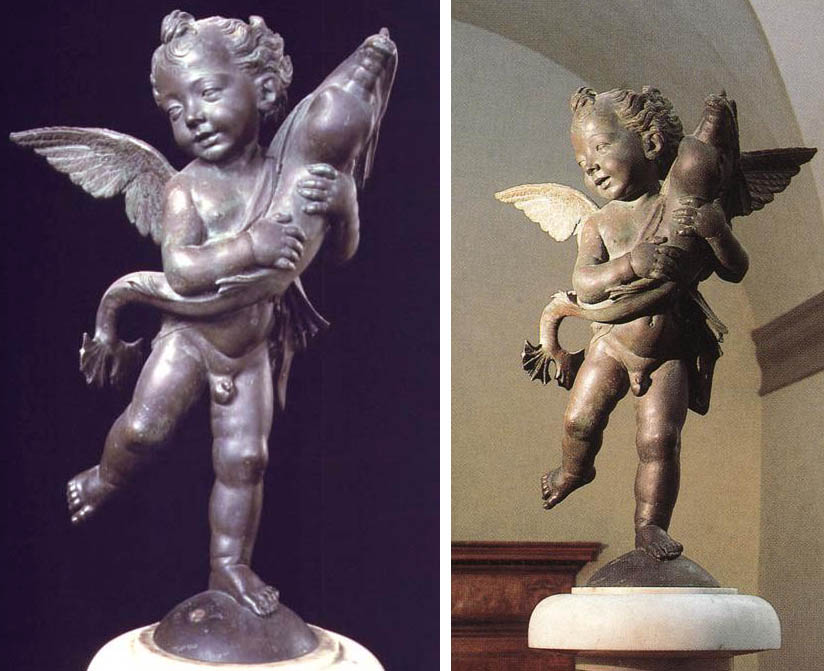 
By a strange coincidence, the crowning achievement of Verrocchio's career, as of Donatello's, was a bronze equestrian statue: the monument of a Venetian army commander, Bartolommeo Colleoni (fig.

622). In his will, Colleoni had requested such a statue and, by way of encouragement, had left a sizable fortune to the Republic of Venice. He obviously knew the Gattamelata monument and wanted to ensure the same honor for himself. Verrocchio, too, must have regarded Donatello's work as the prototype of his own statue, yet he did not simply imitate his illustrious model. He reinterpreted the theme less subtly perhaps, but no less impressively. The horse, graceful and spirited rather than robust and placid, is modeled with the same sense of anatomy-in-action that we saw in the nudes of Pollaiuolo. Its thin hide reveals every vein, muscle, and sinew, in strong contrast with the rigid surfaces of the armored figure bestriding it. Since the horse is also smaller in relation to the rider than Gattamelata's, Colleoni looms in the saddle like the very embodiment of forceful dominance. Legs rigidly straight, one shoulder thrust forward, he surveys the scene before him with the utter concentration of Donatello's St. George (fig. 570), but his lip is now contemptuously curled.

Neither Gattamelata nor Colleoni is a portrait in the specific sense of the term. Both project an idealization of the personality that each artist associated with successful leadership in war. If Gattamelata conveys steadfast purpose and nobility of character, Colleoni radiates an almost frightening sense of power. As an image of awesome self-assurance, it recalls the Can Grande (see fig.

506) rather than the Gattamelata monument. Perhaps Verrocchio visited the tomb of the Can Grande (who was well remembered in Florence as the patron of Dante) and decided to translate the wonderful arrogance of the statue into the style of his own day. In any case, Colleoni got a great deal more than he had bargained for in his will. 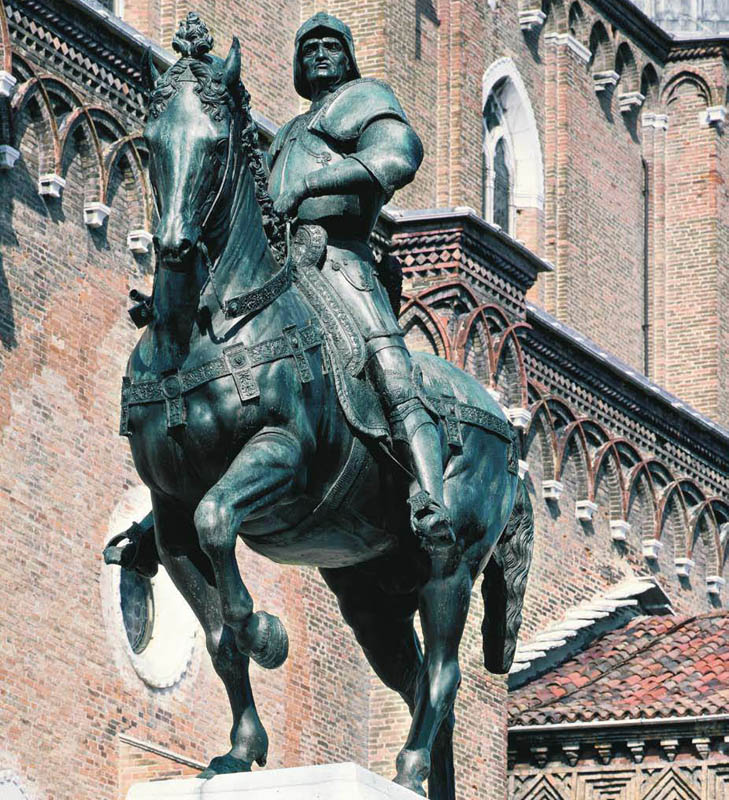 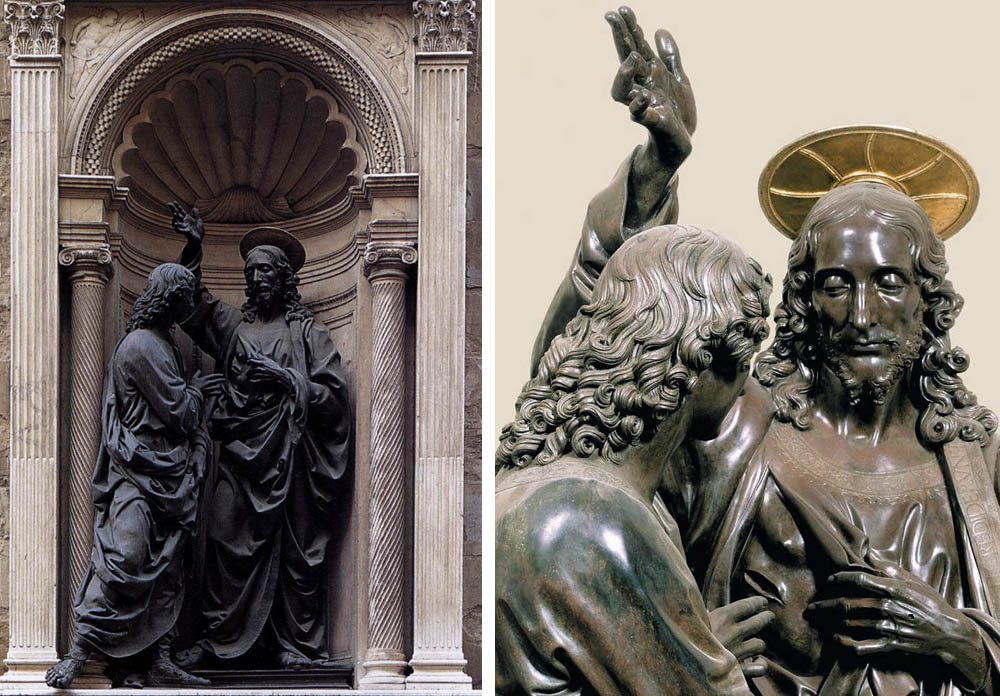 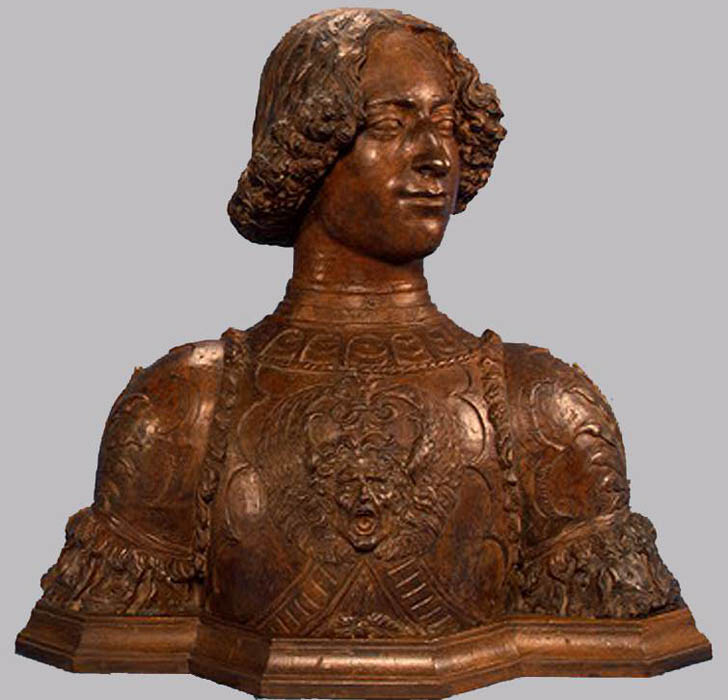 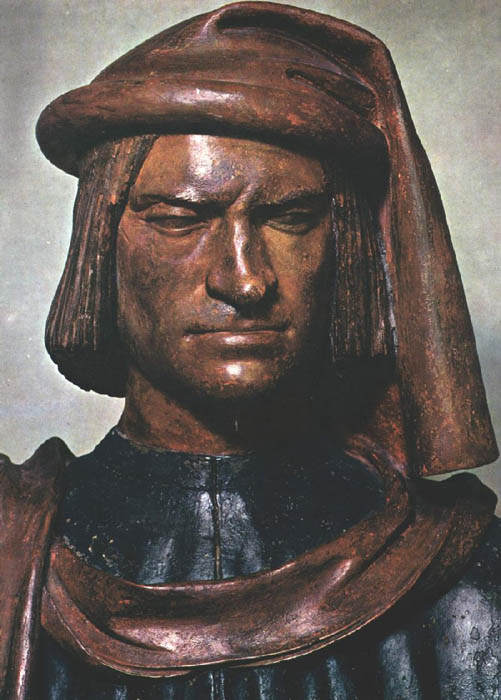 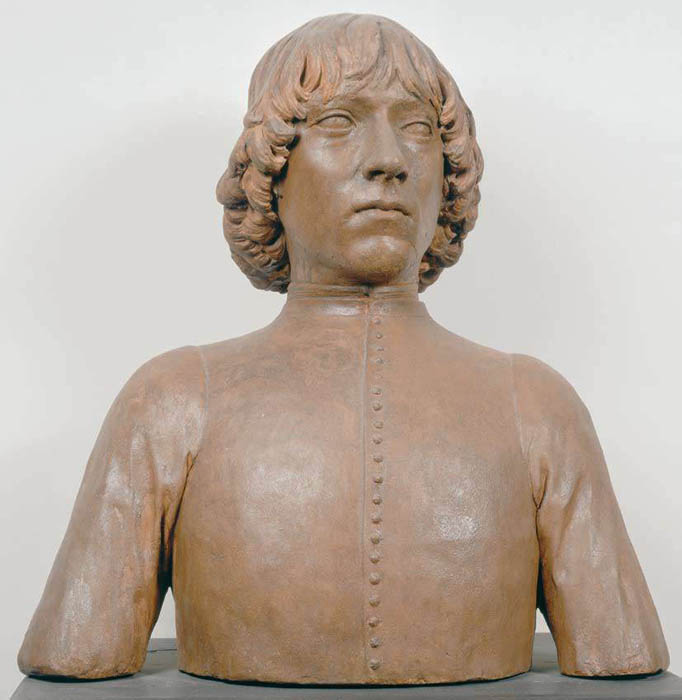 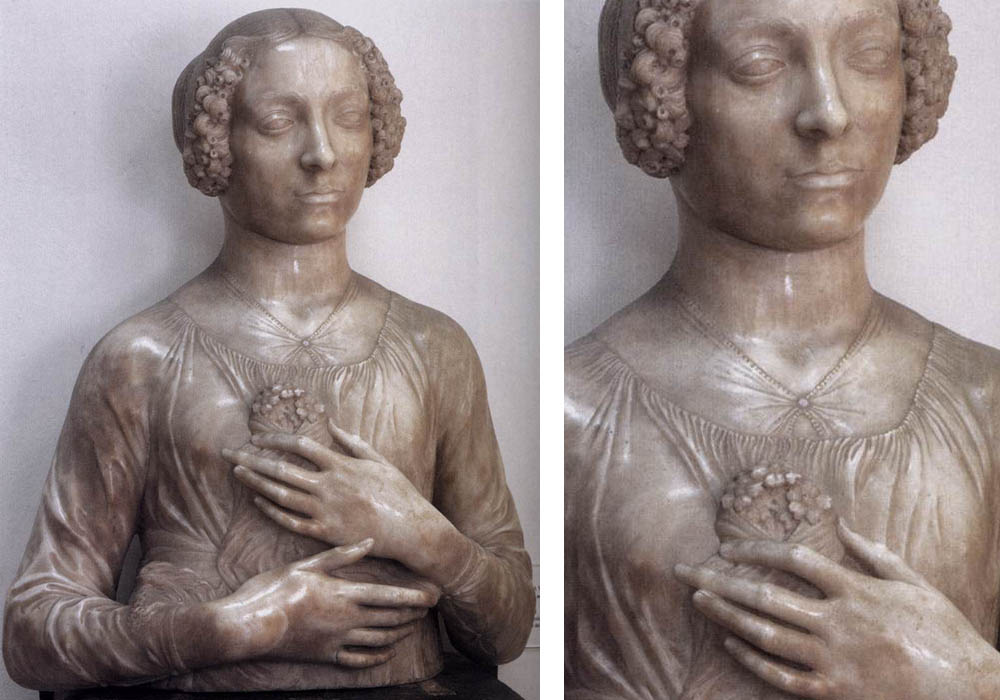 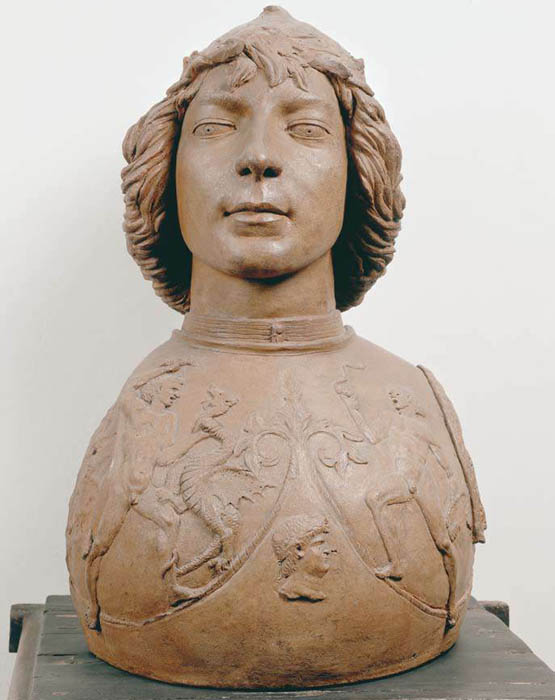 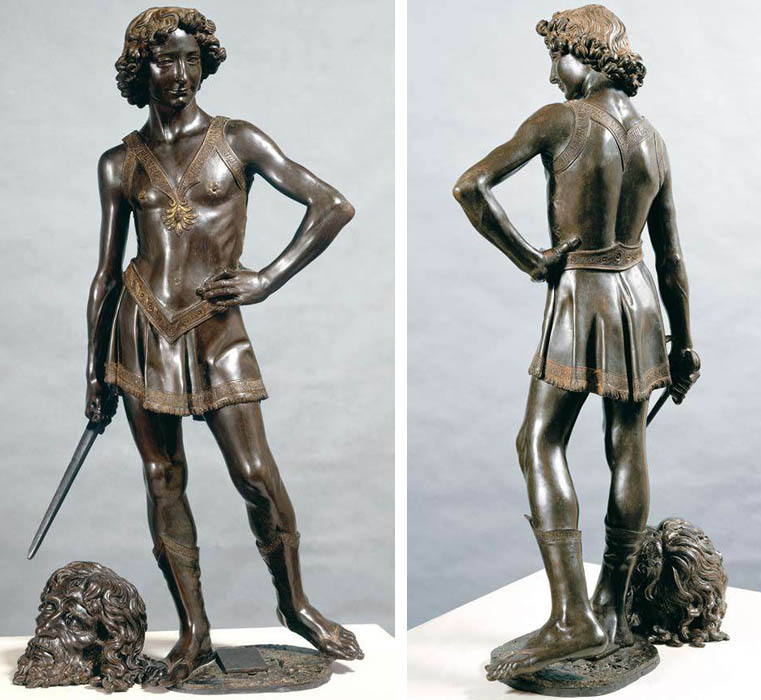 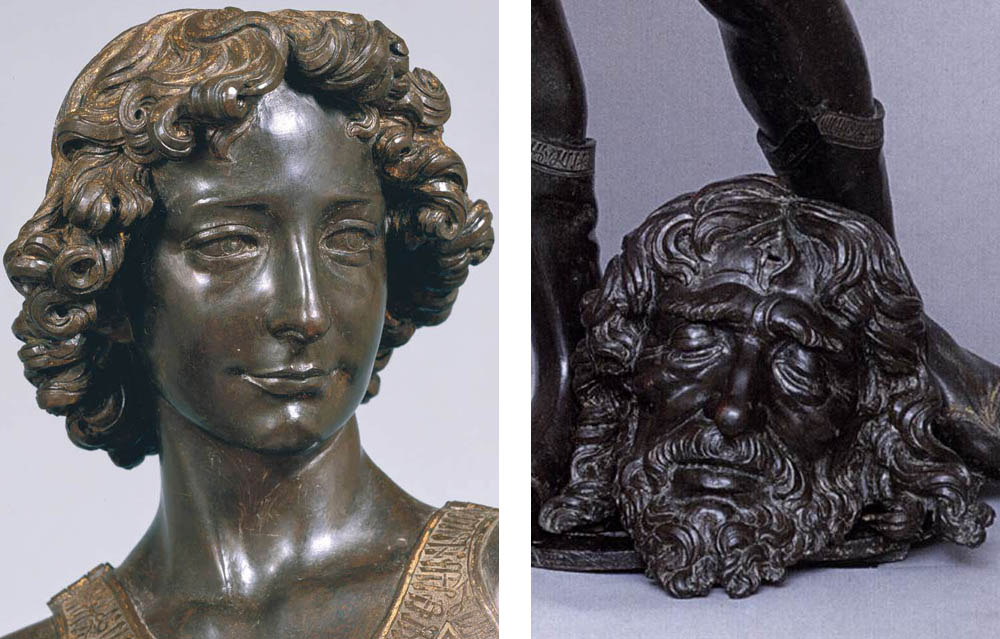 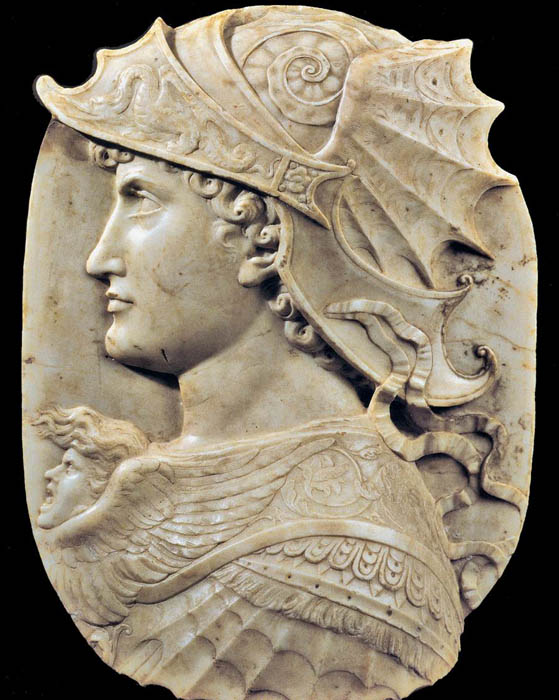 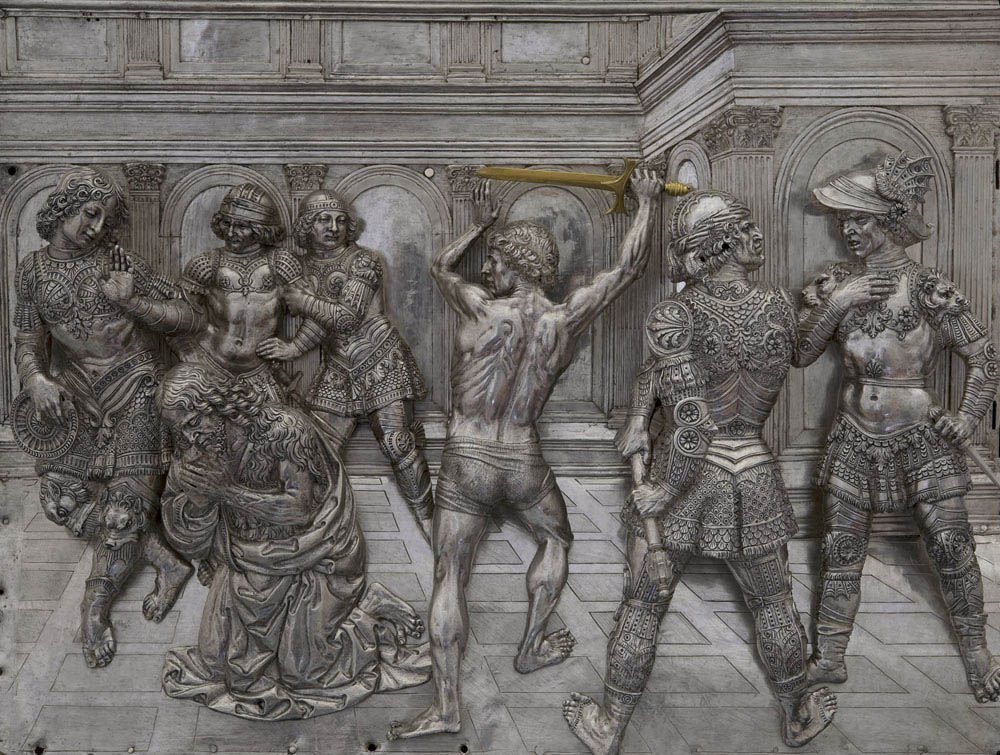 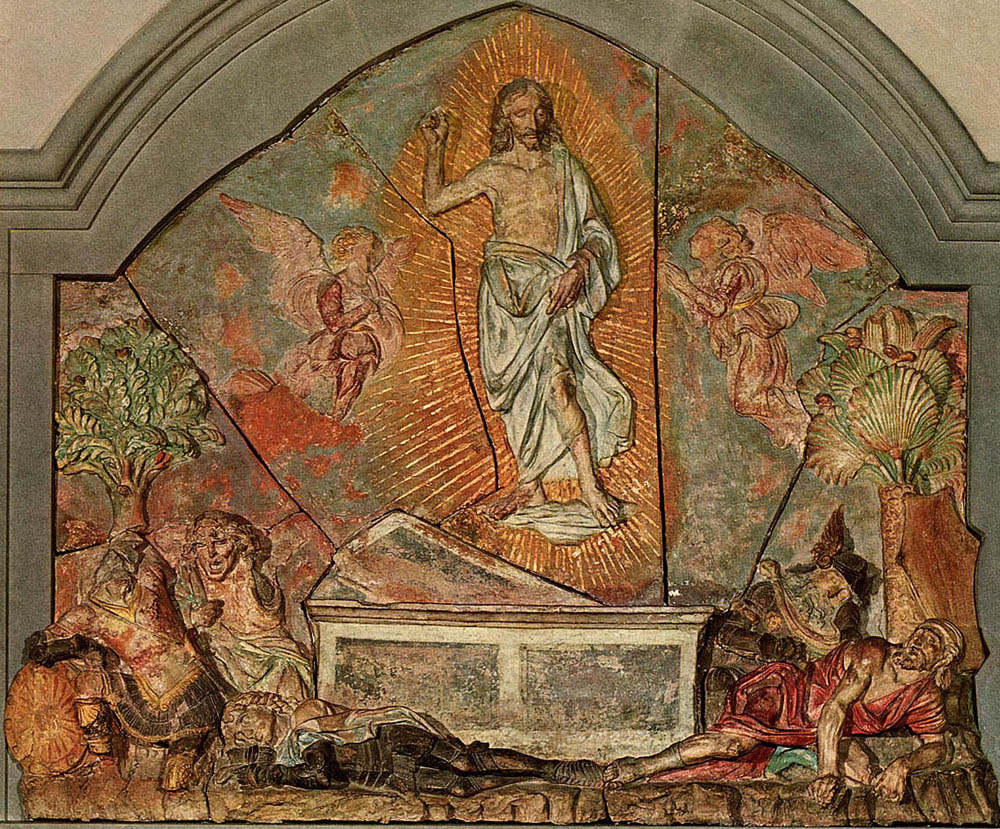