Among the astonishing things about Gothic art is the enthusiastic response this "royal French style of the Paris region" evoked abroad. Even more remarkable was its ability to acclimate itself to a variety of local conditions

—so much so, in fact, that the Gothic monuments of England and Germany have become objects of intense national pride in modern times, and critics in both countries have acclaimed Gothic as a peculiarly native style. A number of factors contributed to the rapid spread of Gothic art: the superior skill of French architects and stone carvers; the great intellectual prestige of French centers of learning, such as the Cathedral School of Chartres and the University of Paris; and the influence of the Cistercians, the reformed monastic order founded by St. Bernard of Clairvaux. He, we will recall, had violently denounced the flights of fancy of Romanesque sculpture. In conformity with his ascetic ideals, Cistercian abbey churches were of a distinctive, severe type. Decoration of any sort was held to a minimum, and a square choir took the place of apse, ambulatory, and radiating chapels. For that very reason, however, Cistercian architects put special emphasis on harmonious proportions and exact craftsmanship. Their "anti-Romanesque" outlook also prompted them to adopt certain basic features of the Gothic style. During the latter half of the twelfth century, as the reform movement gathered momentum, this austere Cistercian Gothic came to be known throughout western Europe. Still, one wonders whether any of the explanations we have mentioned really go to the heart of the matter. The ultimate reason for the international victory of Gothic art seems to have been the extraordinary persuasive power of the style itself, its ability to kindle the imagination and to arouse religious feeling even among people far removed from the cultural climate of the Fie-de-France.

That England should have proved particularly receptive to the new style is hardly surprising. Yet English Gothic did not grow directly from Anglo-Norman Romanesque but rather from the Gothic of the Ile-de-France, which was introduced in

1175 by the French architect who rebuilt the choir of Canterbury Cathedral, and from that of the Cistercians. Within less than 50 years, it developed a well-defined character of its own, known as the Early English style, which dominated the second quarter of the thirteenth century. Although there was a great deal of building activity during those decades, it consisted mostly of additions to Anglo-Norman structures. Many English cathedrals had been begun about the same time as Durham (see figs. 408-10) but remained unfinished. They were now completed or enlarged. As a consequence, we find few churches that are designed in the Early English style throughout. 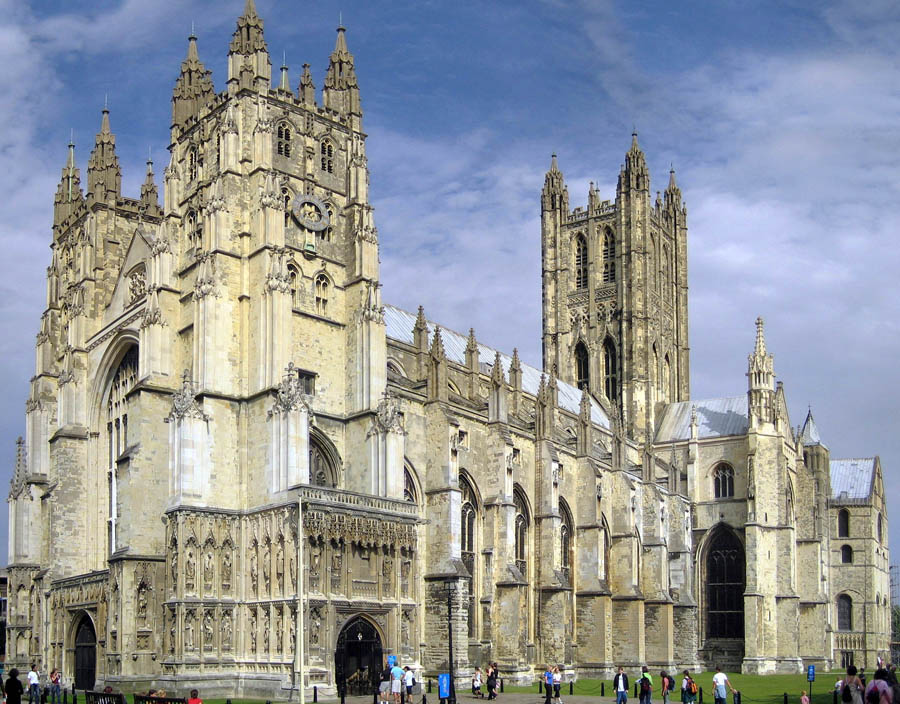 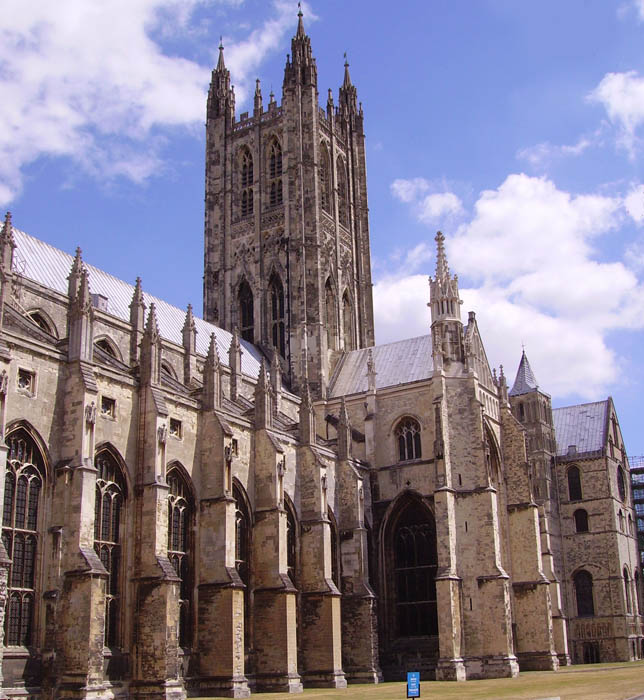 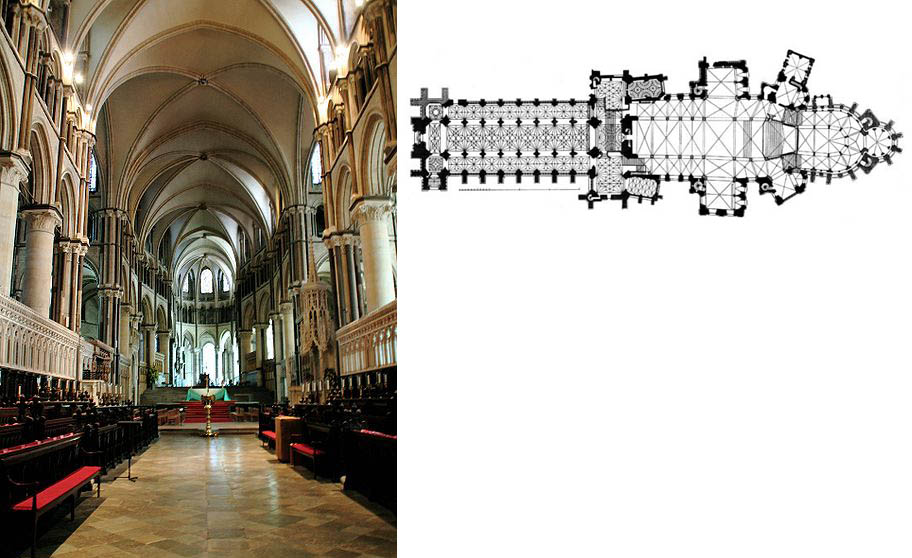 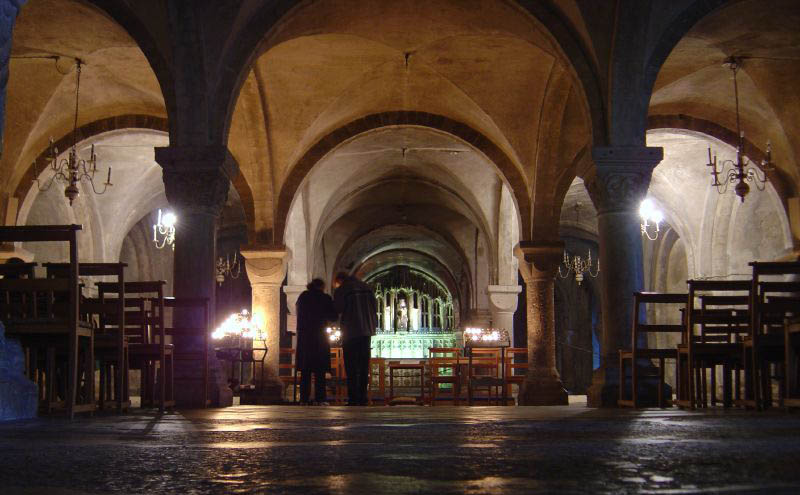 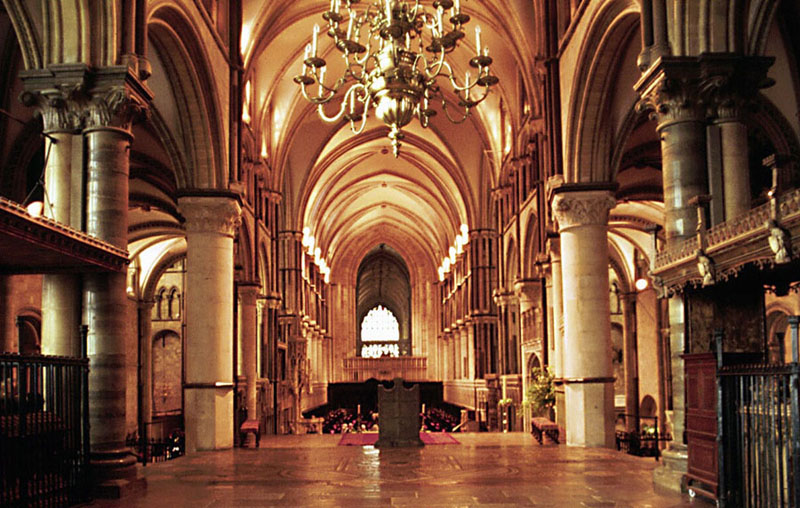 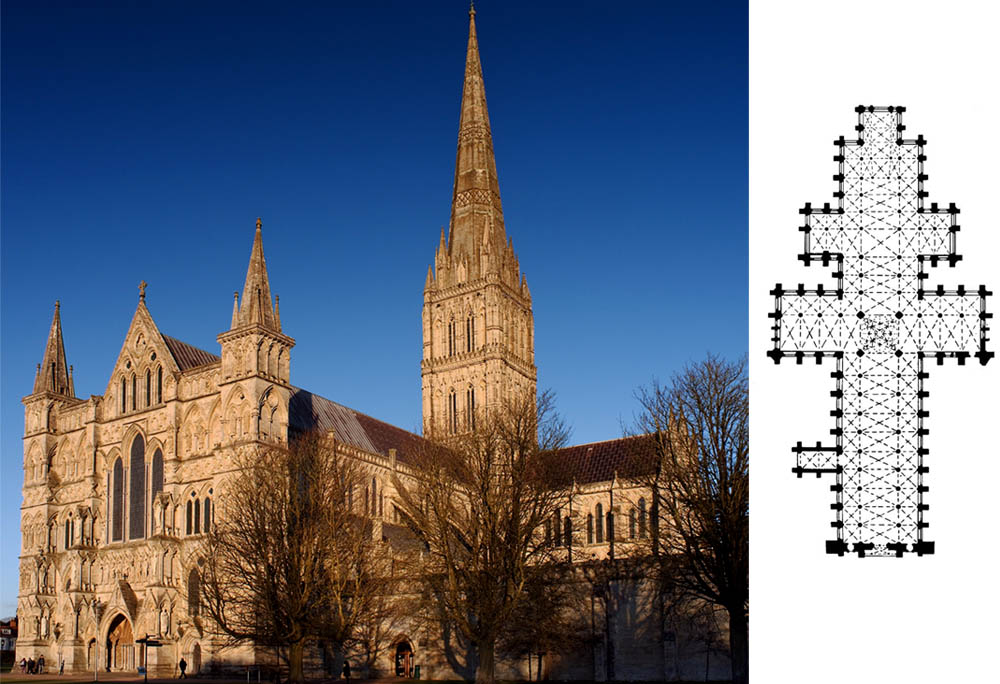 Among cathedrals, only Salisbury meets this requirement (figs.

467-69). We realize immediately how different the exterior is from its counterparts in France—and how futile it would be to judge it by French Gothic standards. Compactness and verticality have given way to a long, low, sprawling look. (The great crossing tower, which provides a dramatic unifying accent, was built a century later than the rest and is much taller than originally planned.) Since there is no straining after height, flying buttresses have been introduced only as an afterthought. The west facade has become a screen wall, wider than the church itself and stratified by emphatic horizontal bands of ornament and statuary, while the towers have shrunk to stubby turrets. The plan, with its strongly projecting double transept, retains the segmented quality of Romanesque structures, but the square east end derives from Cistercian architecture.

As we enter the nave, we recognize the same elements familiar to us from French interiors of the time, such as Chartres (see fig.

454), but the English interpretation of these elements produces a very different total effect. As on the facade, the horizontal divisions are stressed at the expense of the vertical, so that we see the nave wall not as a succession of bays but as a continuous series of arches and supports. These supports, carved of dark marble, stand out against the rest of the interior. This method of stressing their special function is one of the hallmarks of the Early English style. Another insular feature is the steep curve of the nave vault. The ribs ascend all the way from the triforium level. As a result, the clerestory gives the impression of being tucked away among the vaults. At Durham, more than a century earlier, the same treatment had been a technical necessity (compare fig. 410). Now it has become a matter of style, thoroughly in keeping with the character of English Early Gothic as a whole. This character might be described as conservative in the positive sense. It accepts the French system but tones down its revolutionary aspects so as to maintain a strong sense of continuity with the Anglo-Norman past. 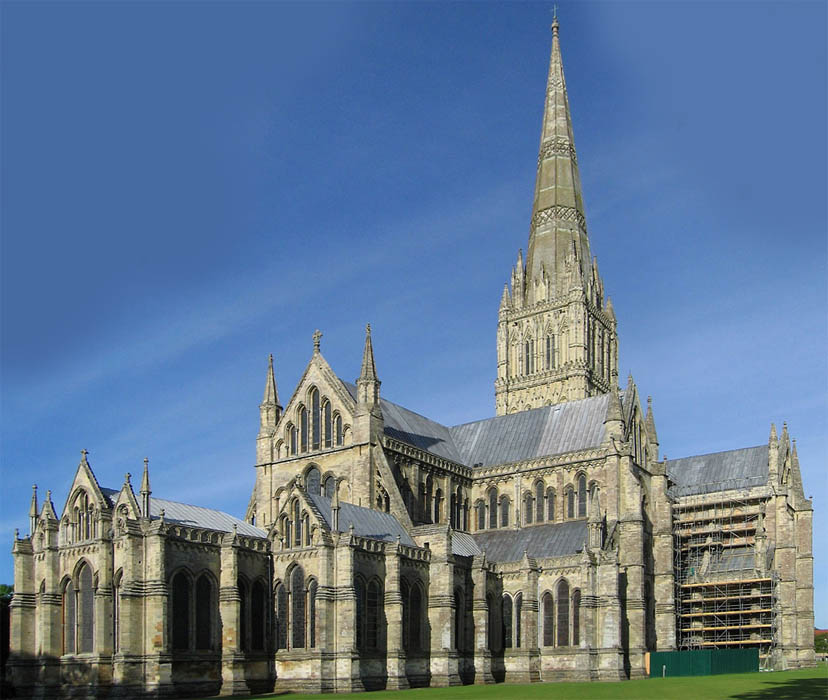 Salisbury Cathedral from the north-east 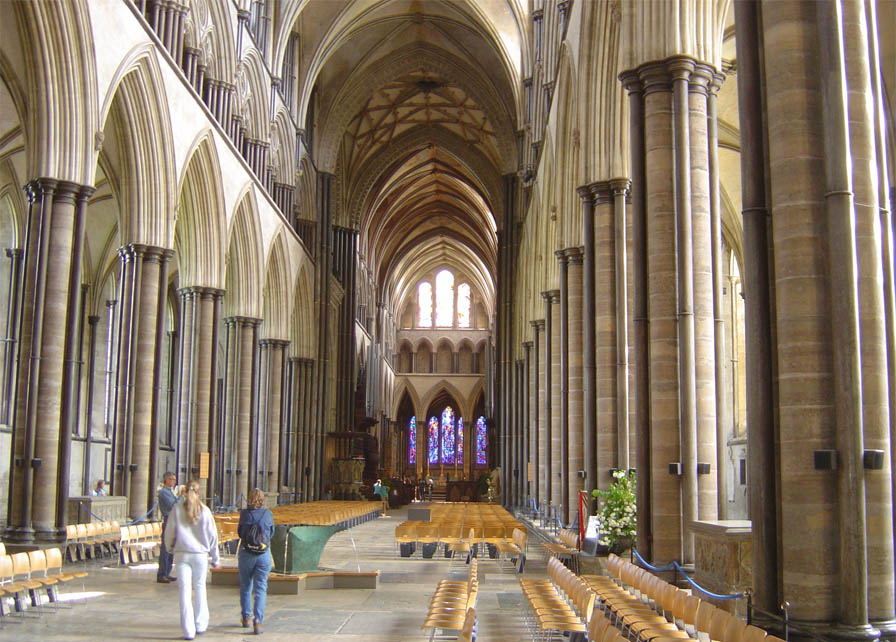 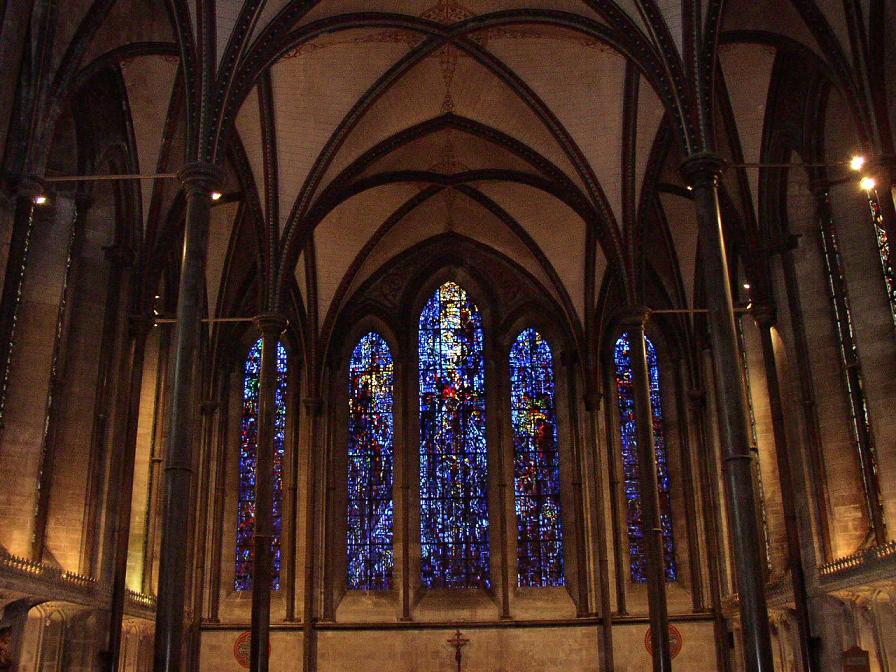 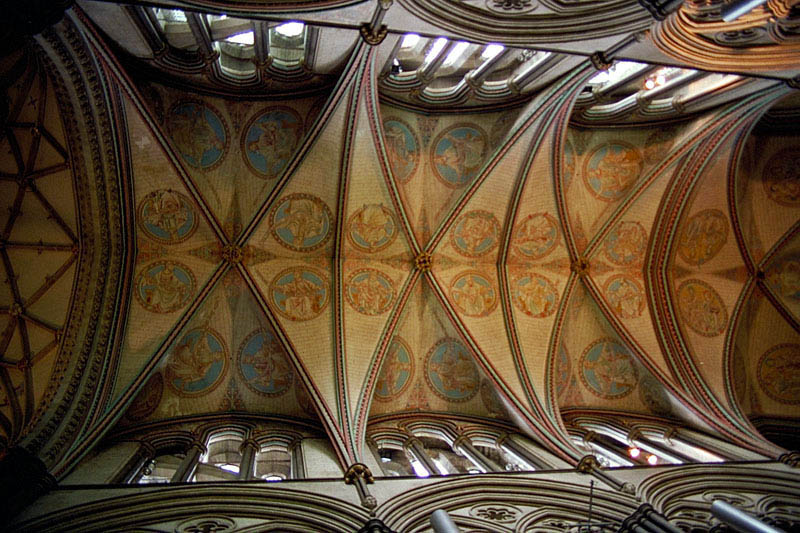 Roof of Salisbury Cathedral, (inside view) 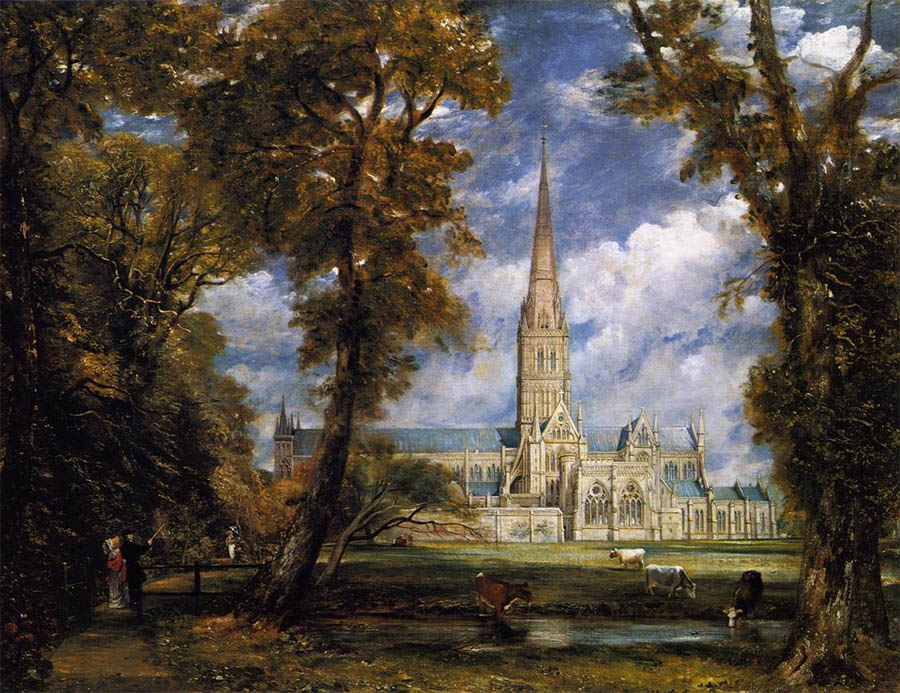 ''Salisbury Cathedral from the Bishop's Grounds'' by John Constable, c.1825.