Germany and the Low Countries 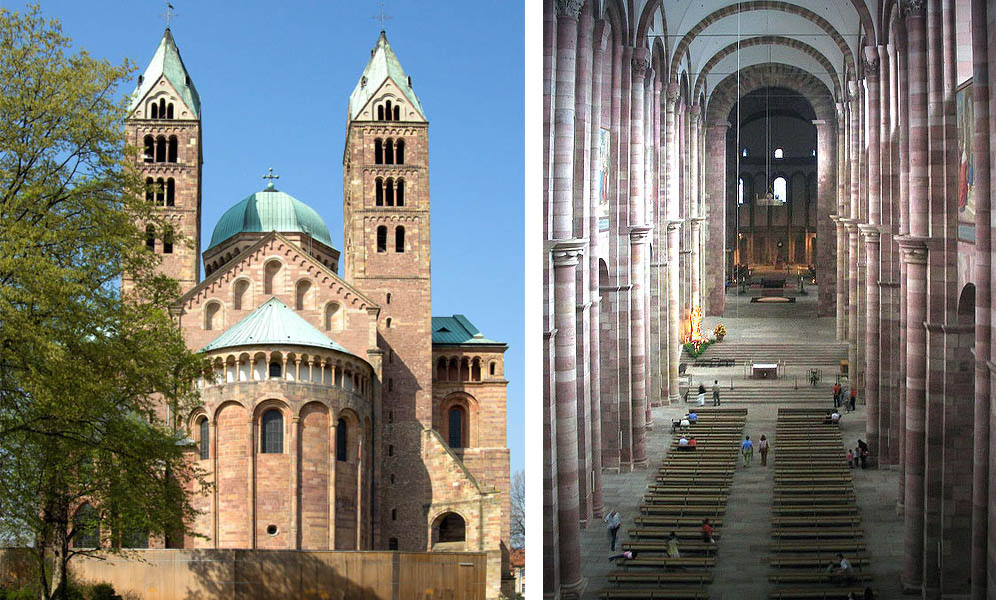 German Romanesque architecture, centered in the Rhineland, was equally conservative, although its conservatism reflects the persistence of Carolingian-Otto-nian rather than earlier traditions. Its finest achievement is the Imperial Cathedral of Speyer, begun about 1030 but not completed until more than a century later. It has a westwork (now sheathed by a modern reconstruction) and an equally monumental eastern grouping of crossing tower and paired stair towers (fig. 416). As on many German facades of the same period, the architectural detail derives from the First Romanesque in Lombardy (compare S. Ambrogio), long a focus of German imperial ambitions. However, the tall proportions are northern, and the scale is so great as to dwarf every other church of the period. The nave, one-third taller and wider than that of Durham, has a generous clerestory, since it was planned for a wooden roof. Only in the early twelfth century was it divided into square bays and covered with heavy, unribbed groined vaults akin to the Lombard rather than the Norman type. 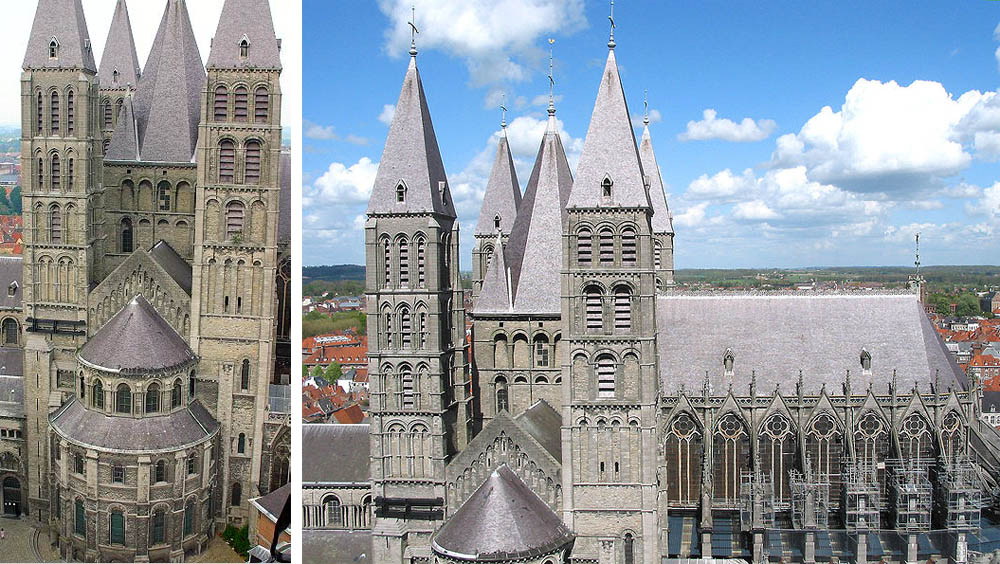 The impressive eastern end of Speyer Cathedral is echoed in a number of churches of the Rhine Valley and the Low Countries. In the Cathedral of Tournai (fig. 417), it occurs twice, at either end of the transept. The result is the most memorable massing of towers anywhere in Romanesque architecture. Originally, there were to have been four more: two at the west facade (later reduced to turrets) and two flanking the eastern apse (replaced by a huge Gothic choir). Such multiple towers had been firmly established in medieval church design north of the Alps since the time of Charlemagne (see fig. 382), although few complete sets were ever finished and even fewer have survived. Their popularity can hardly be accounted for on the basis of their practical functions (whether stair towers, bell towers, or watchtowers). In a way not easily fathomed today, they expressed medieval man's relation to the supernatural, as the ziggurats had done for the ancient Mesopotamians. (The story of the Tower of Babel fascinated the people of the Middle Ages.) Perhaps their symbolic meaning is best illustrated by a "case history." A certain count had a quarrel with the people of a nearby town, led by their bishop. He finally laid siege to the town, captured it, and, to express his triumph and humiliate his enemies, he lopped the top off their cathedral tower. Evidently, loss of tower meant loss of face, for towers were considered architectural symbols of strength, power, and authority. 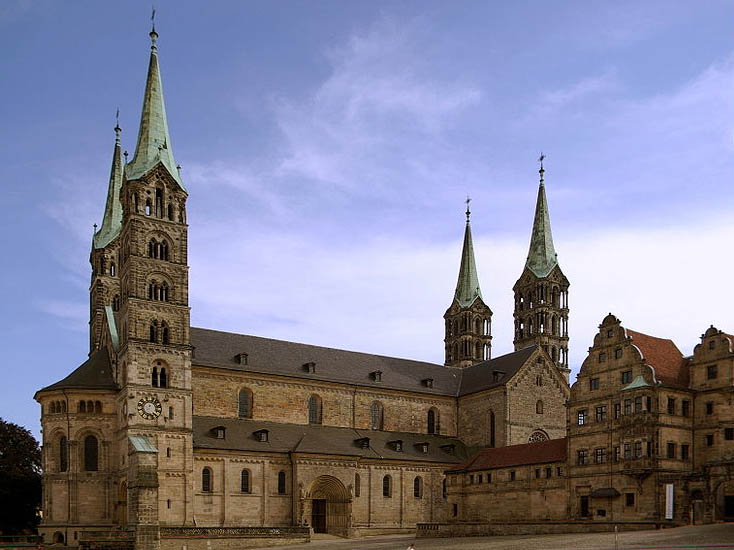 The Bamberg Cathedral (German: Bamberger Dom, official name Bamberger Dom St. Peter und St. Georg) is a church in Bamberg, Germany, completed in the 13th century. The cathedral is under the administration of the Roman Catholic Church and is the seat of the Archbishop of Bamberg.

The cathedral is a late Romanesque building with four imposing towers. It was founded in 1004 by the emperor Henry II, finished in 1012 and consecrated on May 6, 1012. It was later partially destroyed by fire in 1081. The new cathedral, built by St. Otto of Bamberg, was consecrated in 1111, and in the 13th century received its present late-Romanesque form.

The cathedral is about 94 m long, 28 m broad, 26 m high, and the four towers are each about 81 m high. Of its many works of art may be mentioned the magnificent marble tomb of the founder and his wife, the empress Cunigunde, considered the masterpiece of the sculptor Tilman Riemenschneider, and carved between 1499 and 1513.

Another treasure of the cathedral is an equestrian statue known as the Bamberg Horseman (German: Der Bamberger Reiter). This statue, possibly depicting the Hungarian king Stephen I, most likely dates to the period from 1225 to 1237.

Bamberg Cathedral is typically German in appearance with a transept and short chancel, and a second apse projecting from the eastern end, the main door being at the side. The paired towers flank each end of the building and have later copper spires.

The cathedral was founded in 1004 by the emperor Henry II, and was consecrated in 1012. During the next two centuries it was burnt down twice. The building we now see is a late Romanesque building with four big towers. It has a choir at both ends. The east chancel is dedicated to St. George. This symbolizes the Holy Roman Empire. The west chancel is dedicated to St. Peter symbolizing the Pope. 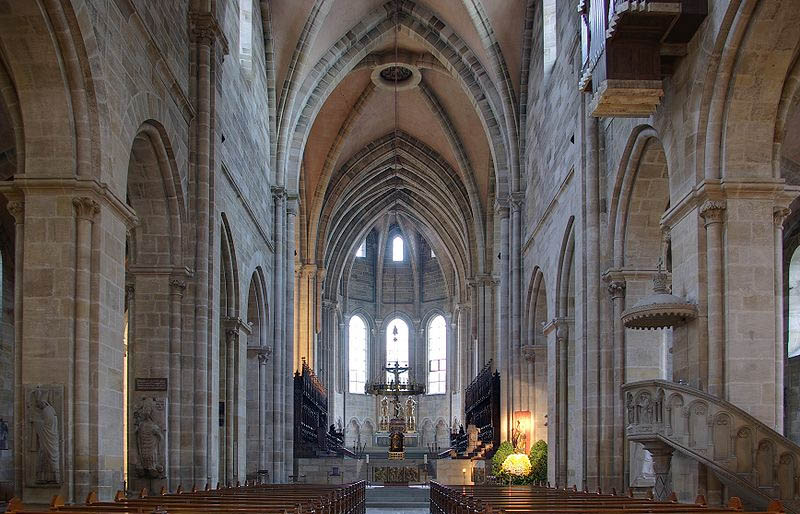 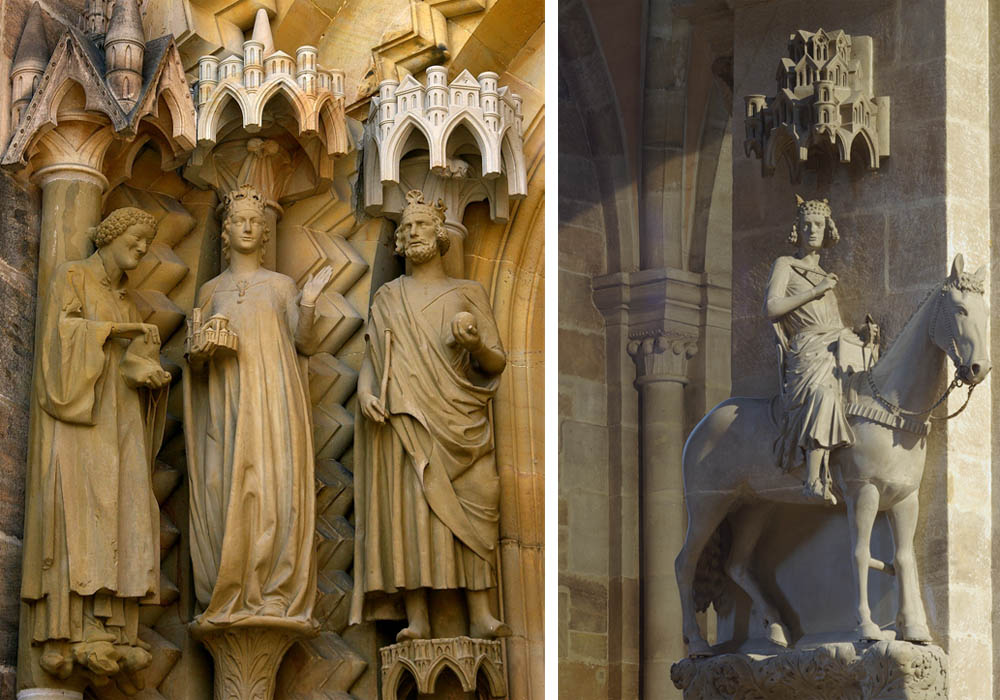 Cathedral of St Peter (German: Wormser Dom) is the principal church and chief building of Worms, Germany. Along with Speyer and Mainz, it ranks among the finest Romanesque churches along the Rhine. This magnificent basilica, with four round towers, two large domes, and a choir at each end, has an imposing exterior, though the impression produced by the interior is also one of great dignity and simplicity, heightened by the natural color of the red sandstone of which it is built. The Catholic Prince-Bishopric of Worms ceased to exist in 1800.

Only the ground plan and the lower part of the western towers belong to the original building consecrated in 1110. The remainder was mostly finished by 1181, but the west choir and the vaulting were built in the 13th century, the elaborate south portal was added in the 14th century, and the central dome has been rebuilt.

The ornamentation of the older parts is simple; even the more elaborate later forms show no high development of workmanship. Unique sculptures depicting salvation stories appear above the Gothic-era south doorway. The baptismal font contains five remarkable stone reliefs from the late 15th century. The church's original windows were destroyed by bombing in 1943; between 1965 to 1995 new windows were made by Mainz artist Alois Plum. 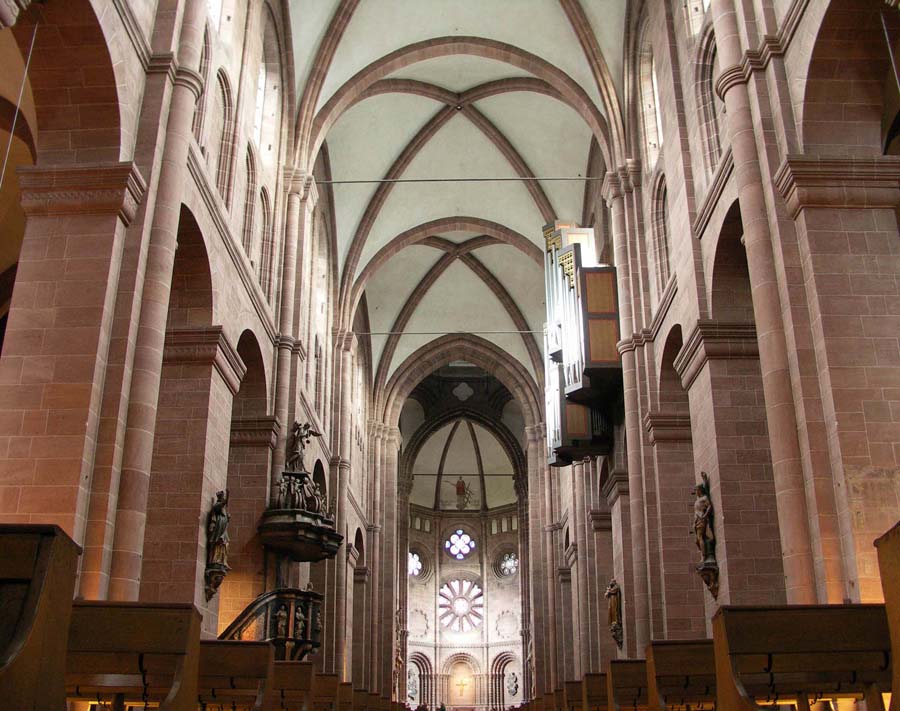 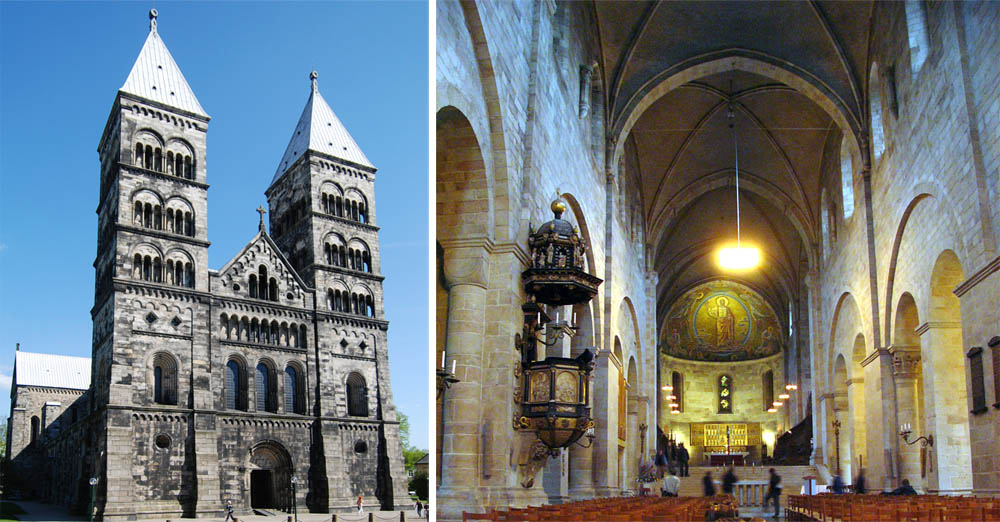 
The Lund Cathedral (Swedish: Lunds domkyrka) is the Lutheran cathedral in Lund, Scania, Sweden. It is the seat of the bishop of Lund of the Church of Sweden.
Lund was an important town long before there was a cathedral. Lund was the site of the Skane Assembly (Danish: landsting) at St Liber's Hill into the Middle Ages. It was also the site of a pre-Christian religious center.

A cathedral was built in Lund before 1085, but it is difficult to know if the present building was built in the same place. In the gift letter of Canute the Holy, dated to May 21, 1085, there is a mention of a cathedral built during the 1080s. Canute gave several properties that enabled the building of the cathedral. However, sources indicate that Canute's cathedral is not the present Lund Cathedral. The Cathedral School was established in 1085, making it Denmark's oldest school.

King Eric I of Denmark went to Rome on a pilgrimage and secured two important concessions from Pope Pascal II: sainthood for his murdered brother, Saint Canute IV and the creation of an archdiocese that included all of Scandinavia. Lund was named as the headquarters. Bishop Asser Thorkilsson became the first archbishop for all of Scandinavia in 1104 and the cathedral was begun sometime after he took office. The building was constructed in the typical basilica style with half-rounded arches supporting a flat timber ceiling. The cathedral was constructed out of granite blocks. The high altar of the crypt was consecrated in 1123. The cathedral and the high altar were consecrated to St Lawrence on September 1, 1145 by Archbishop Eskil, Asser's successor. Of the present church only the apse has remained unchanged. Lund became the religious heart of Denmark and over the years many monasteries, nunneries, priories sprang up around the cathedral.

Lund played a vital role in Denmark's history from the time it was made a bishopric. It was the place of many important meeting between kings and nobility. Valdemar II was crowned there in 1202. In 1234 the church suffered an extensive fire. When the church was rebuilt a lecture wall, new vaults and a new facade to the west were added. Many valuable artistic additions were done to the church in mediaeval times. In 1294 Archbishop Jens Grand was arrested in the Cathedral. In the 1370s, magnificent gothic choir stalls where installed in the church, and in 1398 a gothic, cupboard-shaped wooden altarpiece was placed in the main chapel. An astronomical clock was installed in the nave around 1424 and renovated many times. In the 1510s, during the reign of King John I, German artist Adam van Düren led a major renovation of the church. In the crypt, van Düren created a well decorated with interesting reliefs and a monumental sarcophagus for the most recent archbishop of Lund, Birger Gunnersen.

Lund was an important cultural and religious city in the Middle Ages, as attested by its large number of churches and monasteries. The Reformation caused a dramatic decrease of the influence of the church in the city and country. In 1527 the Franciscan Monastery was forcibly shut down by a mob of townspeople who had received permission to close the monastery. Franciscans were especially hated because they lived by soliciting alms in addition to tithes and other fees ordinary people had to pay to the church. Torben Bille was the last Archbishop and struggled vainly against the Lutherans until he was imprisoned in 1536. He was released the following year after he submitted to the Church Ordinances. The cathedral was stripped of statues, medieval artwork, side altars, and reliquaries.

After the Treaty of Roskilde, in 1658, the Bishopric of Lund was transferred to Sweden.

An extensive restoration was done by Helgo Zettervall in the late 19th century, when the towers got their present appearance. Mosaic decoration was added to the interior of the apse in the 1920s.